Rise of the Guardians 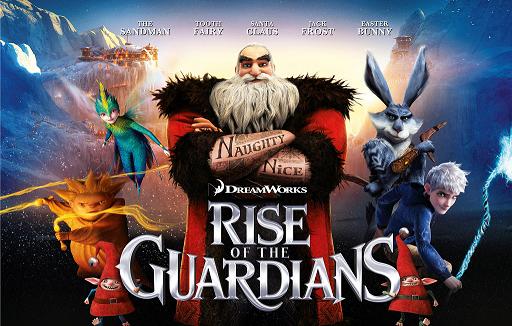 So Rise of the Guardians wasn't quite as good as I was hoping. It was still a nice, decent little film, but I couldn't help but feel like Dreamworks just missed the mark on a number of aspects.

Basically, the story is that the children of the world are protected by the Guardians who watch over them, such as Santa Claus, the Easter Bunny, the Tooth Fairy, and the Sandman. The Boogeyman wishes for a return to the old times when people used to fear him, so he begins a plot to make the children lose their faith in the Guardians and spread fear into the hearts of the children of the world. So the Guardians gather and turn to the Man in the Moon, who guides them to Jack Frost to help thwart the evil Boogeyman. So yeah, that all sounds pretty awesome, right? But, awesome as it sounds, the movie doesn't quite live up to the premise.

The movie starts off strongly enough with the introduction of Jack Frost, as he first discovers his powers and comes to the realization that, unlike the Guardians, the people of the world don't actually believe in him. And his struggle to find his purpose in the world and be believed in is the driving force of the movie. But the introduction of the other Guardians is quite clunky in comparison. They're certainly interesting characters, and the liberties taken with them is definitely a selling point to the movie. Santa, for instance, is a sword wielding, tattooed bad ass. The Easter Bunny is a boomerang flinging Australian bad ass. And hell, even the Sandman, goofy as his character design looks, winds up stealing the show with his sand powers. And he, too, is bad ass.

The Tooth Fairy, on the other hand, comes off as kind of a creep, and provides for some of worst aspects to the movie. There's an entire sequence where the Guardians are trying to help the Tooth Fairy gather teeth from the children of the world that just feels so out of place. For one thing, the scene lasts for entirely too long, but on top of that, they take a comedic aspect to this sequence, which, given the urgency that's supposed to be at hand, just really feels like an odd decision to make. In fact, the humor as a whole is pretty much a miss in this movie (though I did get a pretty big kick from a running gag concerning a painting yeti).

But yeah, despite some flaws, the characters were all good and fun for the most part, and the voice acting was really spot on as well. And even the Boogeyman's goals were actually quite understandable and not just generically evil, which is refreshing in a film aimed at more of a younger crowd such as this.

The movie's strongest point is definitely in the visuals. The film is quite frankly beautiful. The level of detail put into just little things, such as the characters' clothing, is just mind-blowing. And the scenes with the Boogeyman's dark "night-mares" battling against the Sandman's glowing, dreamy sand are absolutely gorgeous. A lot of work was definitely put into the visual aspect of the movie, but it's just a shame that not nearly as much effort was put into everything else.

So yeah, this movie didn't quite live up to my expectations, though I would still say it was a generally good movie. And in an admittedly weak year for animated films, it's probably one of the better ones released this year. It's nothing worth going out of your way to see, but if you do get a chance, then you'll probably still have an enjoyable enough time with this film.