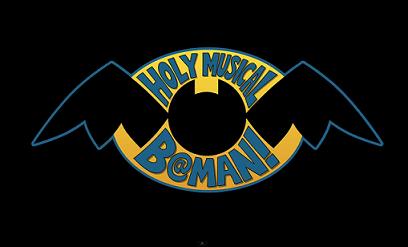 So since the latest Batman movie was such a colossal disaster, let's shift focus instead onto another new Batman property, one that was actually good. Earlier this year, the theater production company StarKid released their latest project on Youtube, Holy Musical B@man! It's pretty much a love letter to the Caped Crusader in all of his various incarnations over the years, but in musical form. And from start to finish, it really is just an absolutely awesome piece of work.

Right off the bat (ha!), we learn that The Joker has been killed off, but in his place a new villain has entered the fray to threaten Gotham City: Sweet Tooth, a candy-based character that's essentially a combination of The Joker and Jim Carrey's Riddler. It's up to Batman to stop him, but he's grown depressed living a lonely life of crime fighting. That is, until he's introduced to Robin, and together the Dynamic Duo take it to the streets of Gotham.

This musical just has so much fun playing with the franchise, and doesn't shy away at all from opportunities to poke fun at fans. Batman speaks in the Christian Bale "Batman voice" throughout the entire thing, the citizens of Gotham talk shit about Captain Marvel... I mean, Superman, behind his back, and they even have a vote to kill off Robin, referencing the actual poll that lead to the death of Jason Todd in the comics. And there's just so many other references to obscure occurrences and characters in Batman lore. I mean, even freaking Calendar Man makes an appearance! But the show doesn't only cater to die hard fans, there's plenty of references that even those most casually familiar with the Dark Knight will catch.

And, dude, puns. Soooooooo many puns. If you thought all the Mr. Freeze ice puns in Batman & Robin were horribl-awesome, then you're in for a real treat here. Hell, the new character, Sweet Tooth, is pretty much the walking, talking embodiment of puns. Every five seconds that guy is impressively pulling out another candy bar from some hidden pocket and tossing out awesome lines such as "Skittle me this!" This movie is just so joyfully painful in this regard. The puns, they hurt so good!

But, being a musical, the highlight of the show is obviously the songs. And these songs are really something else. They're foul mouthed and catchy as hell, and they'll leave you walking away singing: "Fuck you, I'm gonna kick your ass! Fuck you, I'm taking you down!" That's right, those are actual lyrics in this thing, the chorus to the song "To Be A Man", sung during a showdown between Batman and Superman. (Oh wait, did I neglect to mention that this isn't exactly a kid friendly production? Oops.)

And speaking of Superman, I've never been a fan of that son of a bitch (... sun of a bitch!), and as I mentioned earlier, the show makes reference to the common negative fan reaction towards the character. However, this show does a hell of a job making you start to actually feel sorry for the guy, and by the end of it, don't be surprised if you find yourself thinking of the Man of Steel in a more positive light.

There's just so much fun to be had in this show, and there's definitely something worth enjoying for both Batman fans or even just comic book fans in general. Your favorite heroes are almost certain to make a cameo or be referenced at some point. So yeah, I highly recommend checking it out. And since the show is officially available for free on Youtube, there's really no excuse not to watch it. It's definitely more worth sinking your teeth into than that other Batman property, at least.
Posted by Chris Widdop at 9:26 PM