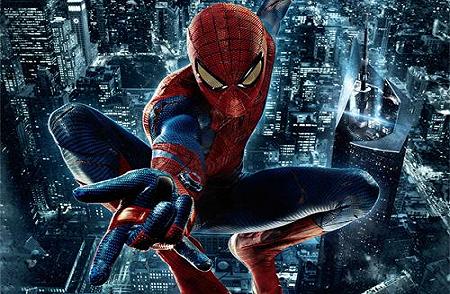 So on our great nation's birthday, I figured, what would be a more American way to celebrate than by checking out the latest Spider-Man flick? Now, going in I did have some reservations with this movie. There were a lot of things highlighted in the previews that had me concerned with the direction they were taking the franchise in this reboot. However, as it would turn out, every single thing that I thought would bug me didn't end up bothering me one bit. I really enjoyed the hell out of this movie.

The Amazing Spider-Man is essentially a better version of the first movie. Just swap places with a few characters (Green Goblin for The Lizard, Mary Jane for Gwen Stacy, J. Jonah Jameson for Captain Stacy, etc.), and it's basically the same movie. But seeing as I was already a huge fan of the first movie, that's not necessarily a bad thing. Yeah, it means that this film is pretty much just retreading old ground, but that was one of the things I was already expecting going in, and it was all handled so well that, as I said, it didn't bother me at all.

The big difference is in the way the characters are handled. Peter Parker, for instance, actually retains his snarky sense of humor from the comics in this version. Andrew Garfield did an awesome job as Parker, quite possibly even better than Toby Maguire. And Emma Stone gave an equally impressive performance as the slightly geeky love interest, Gwen Stacy. She was such a more likeable character than Mary Jane was ever portrayed as in the original movies. And really, that could be said for just about everyone, save for maybe Sally Field's Aunt May, who didn't quite live up to her predecessor from the original movies.

I also really liked all of the different relationships at play. Obviously the love story between Peter and Gwen is the main driving force behind the movie, which was just a joy to watch unfold. And I also really enjoyed watching the evolution of the smaller relationships, such as that between Peter and his high school bully, Flash Thompson. But other than the main love story, I actually found the most intriguing interactions to come between Peter and Denis Leary's character, Captain Stacy. Seeing their clash of ideals play out on screen was very interesting, and ultimately lead to some of the most satisfying scenes in the whole movie.

My biggest concerns going in were related to the origins of the story, and how Spider-Man got his powers. But seeing it all play out, I actually quite liked the way it was handled, and I found it suiting that they decided to go with The Lizard as the villain for this outing. His story plays out very similarly to how the Green Goblin's did in the first movie, complete with inner struggle and everything. But I found him to be a really nice foil to Spider-Man, and he felt like a genuine threat.

The action scenes in this movie were great. I loved the super fast and in your face (literally at times) use of webbing here, which lead to some especially awesome visuals during Spidey's intense encounters with The Lizard. There was one standout scene in particular where the two battle it out in the background while an unsuspecting Stan Lee proceeds to give us his best cameo in a Marvel movie yet. And, as I mentioned before, we got the snarky Spider-Man in this installment, meaning we got to hear him spout out awesome lines of dialogue all throughout his fights, something that was sorely missing from the originals. Also, Spider-Man throws a freaking shoe at The Lizard. How awesome is that?!

So yeah, I really enjoyed this movie. It's definitely a fitting inclusion to the franchise, and quite possibly the best Spider-Man movie to date. It's not as dark and gritty as the trailers sold it as, but it's also not as campy as the originals. Instead, it finds a believable medium that really works in this film's favor. I had my doubts with the direction of the film going in, but after the fact, I really couldn't have asked for a better reboot, and I definitely look forward to future installments of this series. Basically, my feelings on the movie can be summed up in the title itself, this was simply Amazing.
Posted by Chris Widdop at 4:58 PM