Tangled: An overdue review, and a rant against 3D 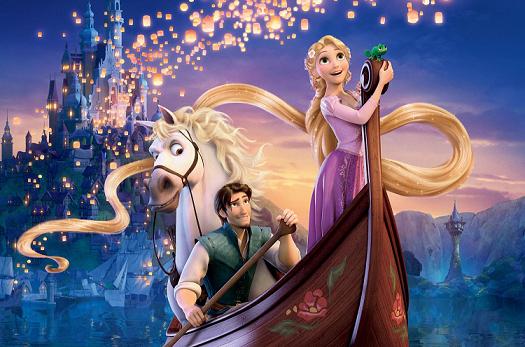 So in 2010, Disney gave us their 50th feature length animated film, Tangled, their version of the story of Rapunzel. Now, going into this thing, I wasn't necessarily expecting much. You see, the marketing for this movie was a complete and total disaster. They put together trailers that made this look like something straight out of the worst kind of Dreamworks animated movie (though to be fair to Dreamworks, they've improved significantly since then).

As it would thankfully turn out, not one single scene that appeared in the god-awful trailers for this movie is actually in the finished film. No, despite what the marketing would have you believe, this is Disney at their finest. It's right up there with classics such as Aladdin, Beauty and the Beast, and The Lion King in terms of quality. A true return to form for Disney.

In this movie, we follow the young girl, Rapunzel, and the dashing thief, Flynn Rider, as they both chase after a dream. Rapunzel just wants to escape from her tower and see the lanterns that always light up on her birthday in person. Flynn, on the other hand, is only interested in riches, but finds himself forced to escort Rapunzel before he can get his hands on his prize. The two leads are a joy to watch on their journey. Rapunzel is so wide-eyed and excited, seeing the world for the first time in her life. Yet she's also conflicted at essentially betraying her mother's wishes. And Flynn is so cocky and arrogant, yet so charismatic that you can't help but like him, no matter how much of a douche he initially is.

But moreso than our leads, the supporting characters are what really bring this film to life. Rapunzel has a pet chameleon, Pascal, who is just awesome. He just makes the perfect facial expressions that just brighten up every single scene he's in. And Maximus, the horse, is an absolute riot. Drawn in a much more classic Disney style, he has a tendency to act more like a dog than any horse we've seen, and he just oozes out personality as he valiantly hunts down Flynn Rider. Such a delight these animal characters are!

As for the villains, they're really quite interesting as well. Mother Gothel, the old woman who stole Rapunzel as a baby and raised her as her own, can be so nasty, and yet, at times, genuinely caring as well. She's so wickedly passive aggressive to Rapunzel. But then, where she could have easily just locked up Rapunzel in a dungeon or something, she instead lets her have run of the tower, and even makes special trips to bring home surprises for her. It's clear that, somewhere during their time together, a genuine bond had formed between the two, which serves to make their later encounters in the movie that much more interesting, and that much more intense. But other than Mother Gothel, we've also got the Stabbington Brothers, who are awesome if only because their names!

The songs in this thing are all also quite great, and ridiculously catchy. "Mother Knows Best" is pretty much the anthem of passive aggressiveness, and "I've Got A Dream" is such a fun little tune that'll be stuck in your head for days. "I See The Light" actually got nominated for best original song, and deservedly so. It's such a powerful song, and really delivers a strong emotional gut check. Truly one that's up there with the best of classic Disney tracks.

Rapunzel and Flynn's journey is a magical one that embraces the classic Disney formula. Yet it's not afraid to poke fun at its own tropes, and is filled with tons of fun moments. There's action and adventure, singing and dancing, love and betrayal, the works! It's a fantastic journey filled with wonder, and it's presented in a beautiful style, mixing the classic Disney look with modern 3D animation.

Now, the first time I saw this movie was in a 3D showing. I left the theater fully satisfied, though it wouldn't be until I rewatched it again a few months later on DVD that I would see just how stunning this movie actually is. Watching this movie on home video was an entirely different experience, and one that elevated this movie from just a really good Disney movie, to something that was truly special. And I didn't know what it was that made such a drastic difference, until I did my write-up on Tangled in my War Horse review. There, I explained the emotional impact this movie delivered, an impact that was missing when I saw it in theaters. Or, more specifically, when I saw it in 3D.

You see, during the big emotional scenes, the 3D version distracted us from the emotion, focusing instead on the spectacle of the 3D effects, which took away from all of the raw emotion on display. I still enjoyed the movie in 3D, but it wasn't until I saw a 2D viewing of the movie that I was able to see just how amazing this film really is. Without the 3D there to distract us, I could safely say that this is the absolute best movie I saw in 2010, something I wasn't able to say beforehand. And coming to this realization is just one of the bigger recent examples of why I refuse to support 3D in movies. Every time I've seen a movie in 3D, it's either added nothing to the movie, or in some cases, detracted from the movie. And considering the inflated ticket prices, it's just flat out not worth it, in my experience.

But anyways, like I said, despite the 3D, I still enjoyed the movie quite a lot, and especially so without it. So ignore the atrocious marketing this film had, this is classic Disney at their finest. The story is lovely, the characters are a blast, the animation is beautiful, and you'll be singing the songs in your head for some time after the credits have finished rolling. So if you haven't checked it out yet, then what are you waiting for? Go see Tangled! 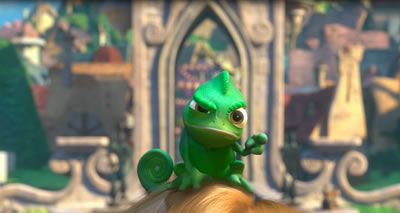