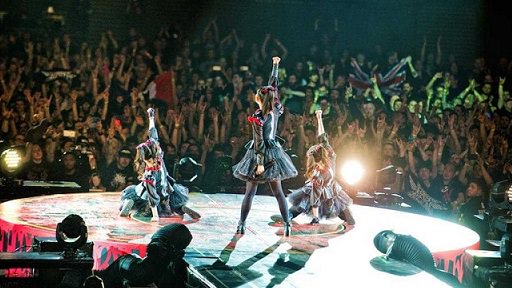 Moving on to probably the band's biggest international show to date, Babymetal took to the stage at the famous Wembley Arena in London to kick off their 2016 World Tour in a huge way. This was also probably their longest single night show so far, as they introduced quite a number of new songs from their new album Metal Resistance on this night as well.

In terms of stage set-up, it was honestly very similar to Legend 2015, featuring a main stage and a bridge running down the center of the venue leading to a smaller center stage. And the girls started things off by crossing that bridge and performing Babymetal Death on that smaller stage. And let's just say it was sorta nuts seeing those three running around on such a small stage, as they barely had any room to move around one another at that point in the song.

Still remaining on the small stage, they moved on to Awadama Fever. On this song though, I noticed how the fans appeared to be muted, and honestly, the first time around, I actually questioned if there was perhaps some sort of audio issue that required them to have to dub the studio version over their performance. I had to go back and watch it again prior to this write-up in fact, listening especially carefully this time out. But upon second viewing, no, the audio's definitely live here. But holy crap is it a testament to this band's ability when I can watch their performance and can't tell the difference between their live and studio quality.

If you recall from my World Tour 2014 review, I mentioned how they had started incorporating a symphonic lead-in to Akatsuki. Well they did that here again, and they appear to have extended it this time out, which is pretty cool. But then the song kicks in proper, and in the jaw-dropping moment of the night, Su ran through fire across the bridge to the main stage as the bridge was set aflame! Just, such an awesome, awesome visual!

Black Babymetal came out next, and they introduced us to one of their new tracks (and probably my favorite Black Babymetal song at that), GJ. And it's interesting seeing it being performed with both Moa and Yui on stage, as I've honestly become used to this being a Moametal solo by this point, but that probably just comes from me becoming a fan so late in the game. But this is just another great fun and infectiously catchy song, with some really cool choreography to boot, and I'm glad to see it finally added to the set list here.

That awesome silhouette effect for Catch Me If You Can returned on this evening (though I'd say I prefer the Makuhari Messe version still), so that was pretty neat to see again. And then I found myself gasping once more at the introduction of another new song as soon as Meta Taro kicked in. This is another example similar to Song 4 where on the album, this song isn't necessarily my favorite to listen to, but boy do I dig the hell out of it whenever they perform it live.

It's a viking metal song, and it has this really unique pirate-esque choreography that's both really cute and really cool. And they just have a way of taking this song and making it feel so atmospheric and larger than life. This is especially so on occasions where they incorporate a call-and-response moment to the song, though that didn't happen on that particular night. But that does leave me looking forward to seeing this song come up again in upcoming shows, to see just when they decided to incorporate that aspect into the live version of this song.

Speaking of Song 4 though, their performance of this song on this show is quite possibly my favorite performance of the song yet. It started out with this really silly Star Wars style opening (may the 4th be with us all indeed!), and with the stage set-up, it's honestly very similar to the way they performed the song at Legend 2015, with them running to every side of the arena before crossing over the bridge and ending things in the middle of the audience. But on this night, I just couldn't get enough of their adorable English as they played to the fans, which really elevated the cute factor of the song as well. Loved it!

Su's got a new solo to debut on this night as well, as she stands on the stage while the image of an angel's wings appear behind her. And from the very first note of Amore, I could already feel it in my chest. This was another beautiful solo from Su, as well as being another new opportunity to shine the spotlight down on the Kami Band for a handful of instrumental solos of their own during the song. And I loved how near the end, Su just dropped to a knee, and the song just sorta paused for a moment. And then she slowly stood back up to her feet, softly resuming the song at first, before it kicked back into full gear proper once more. Just a really awesome way all around to debut this new song.

The full English version of The One was being performed on this night. And as we get to this song, now's where I have to make my token mention of this band getting me all teary eyed and emotional during one of their performances. Now, usually it's the band who goes out of their way to do something special for the fans on these big shows. But on this night, it was actually the fans who went out of their way to show a gesture of gratitude for the band, as during this song, fans from all over the world held up flags from their home countries, showing just how far and wide their fanbase reached, and just how far abroad many had traveled just to see them on this occasion.

And you could see it on the girls' faces as they were spun around on the center stage just how touched they were by this gesture. As much as this band plans out their events well in advance, they obviously didn't plan on a moment such as this, and it was a really sweet and affecting moment to see play out.

The show then closed out strong with yet another chilling performance of Road of Resistance. And then afterwards, rather than just immediately seeing the fans off, the girls actually took a moment to really soak it all in, before each taking turns addressing the audience in English, really showing their own appreciation for the fans on this evening. This was just really cool to see them do, and a great send off to yet another phenomenal show.

So yeah, what more is there to say? The band just keeps getting better and better, and their shows just keep getting bigger and bigger. And up next, we'll be taking a look at what is quite possibly the band's biggest show to date, as they'll be emanating from the world famous Tokyo Dome in another two night event, and I can't wait to see it for myself. See you!