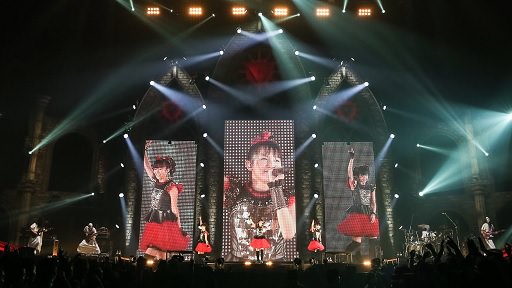 It's a new year, and we're starting things off strong with a new Legend, as Legend 2015 emanates from the Saitama Super Arena in Japan. At the beginning of their 2014 World Tour, the girls launched off in their space coffins at the end of Budokan in order to travel across the Metal Galaxy. But now that the World Tour has ended, we see this show start off with those space coffins landing back in Japan, as the girls step back out and onto a stage in front of thousands of roaring fans.

The stage set-up was pretty neat this time out, as in addition to their main stage, they also had two smaller stages off to either side, with these cool little bridges that lead to them. But then they also had a much larger bridge that would descend from the rafters at times, and which would lead to another smaller stage in the center of the venue, where the girls would be surrounded all around by the crowd in attendance.

We kicked things off with Megitsune, as the girls, adorned in kimonos and holding up fox masks in front of their faces, crossed that large bridge to open the show on that smaller center stage, getting up close with the fans for a strong start to the evening. They then jumped into Iine next, and this time out, when we got to the rap section of the song, they actually sang the lyrics from the studio version of this song, which they haven't done since their early early years. I saw their commentary track on the Iine music video a little while back, and I remember how when we got to that section, they commented how it had been a long time since they actually sang that part of the song live, and mentioned how they should probably bring it back sometime. So I'm curious how long after that commentary was recorded that they did this show, where they indeed brought it back.

Next up was Awadama Fever, and I seriously gasped when this song started up. This song isn't even new to me, yet seeing it being performed as a new song on this show just made me absolutely giddy. And on top of that, the lyrics and the choreography for this song are just so much damn fun, my eyes started welling up from it. Funny how often that tends to happen when I'm watching this band.

Once it was time we got to Catch Me If You Can, they had the big LED screen set-up behind them again, so I thought they might try and do that silhouette trick again here. But nope, they managed to change things up in a different way this time, as the three girls appeared on different stages, playing to different sides of the crowd on the massive venue, with Yui and Moa starting the song out on the two smaller side stages, before making their way over the bridges to join Su on the main stage for the remainder of the song.

And speaking on Yui and Moa, those two just continue to outdo themselves with Song 4, as they ran off to all sides of the building to play up to the crowd, before the big bridge lowered back down for them to cross over onto the center stage where they kept the party going amidst the crowd as they finished the rest of the song there. I swear, seeing those two running around playing to the crowd is just the best damn thing in the world.

Then it was Su's turn next with Rondo of Nightmare. She started the song on that center stage, only to step onto the bridge and have it raise her high above the crowd, as she continued to belt out her solo, looking down over her amassed army all around her like a Queen. Seeing her elevated high in the air like that made for such an awesome visual.

Yui and Moa busted out their smoke guns again on this night's rendition of Headbanger, though they appeared to be far less powerful than before this time out. And on this night, I haven't noticed her doing this before, but during both Headbanger and later on during Ijime, Dame, Zettai, I noticed Yui was mouthing along with Su's vocals during those songs, which I got a decent kick out of.

Moving on now to Ijime, Dame, Zettai, the audience formed their Walls of Death prior to the song, and these had to be some of the most impressive Walls of Death I've seen on any of their shows yet, and it was a truly awesome sight to see just such a mass of people crashing into each other after the song kicked in. Then the song's going along, and we get to the part where Yui and Moa do their fight dance. And Jesus Christ, when Yui comes back on the attack against Moa, she freaking runs and jump kicked over Moa. Holy crap, my jaw hit the floor when that happened! Yuimetal, you are a bad ass!

As is usually the norm by this point, they see the fans off after Ijime, Dame, Zettai, but of course we're not done, as we've gotta come back for the encore. And the sequence of songs they chose for this particular encore is seriously this band in a nutshell. Starting with Babymetal Death, then moving straight onto Doki Doki Morning and closing things off with Road of Resistance, this showcases how this band is both metal and kick ass, yet they're silly and they're fun, and also how they're absolutely and undeniably epic, and they know how to put on an unforgettable spectacle of a show.

And for this performance of Road of Resistance, take everything I said about that song from their O2 Academy Brixton show, and crank that up to 11. Queen Su simply holds this audience in the palm of her hand, as she solely makes the decree for the seas to part without having to utter a single word, and the audience adheres to her every command. And they continue to be the ever loyal subjects, obediently singing along as the girls cross back over that bridge once more, carrying their flags and singing their battle cry.

The crowd participation element that they really introduced on their 2014 World Tour is fully realized on this show, and that's never more evident than when all music shut off and the band turned the spotlight onto the fans for an extended period of time to sing the song back to them, truly becoming The One in that moment. I've noticed how in a number of the band's later shows, they really go out of their way to really make the audience a part of the show, and I feel that this was the true starting point of bringing the fans into the mold in that regard, which was perfectly symbolized through this show's use of all these bridges.

For all the metalheads out there who still like to say that this band isn't real metal, and that they're just a gimmick, I for the life of me can't comprehend how you can watch a performance like this and still somehow come away claiming they aren't the real deal. Because this isn't just one of the band's overall best performances that I've seen yet, it's one of the most awesome, most epic, and most metal performances I've ever seen in the entire genre. Truly, this was an outstanding performance, and I give a well earned standing ovation to these girls on this night!

It's just simply amazing how much this band not only continues to raise the bar for themselves, but how they then continue to so seamlessly succeed in outdoing themselves over and over again. Just when you thought they can't top themselves, they go out there and they do just that. And that's precisely what they did on this night with that closing number. A phenomenal performance, and the perfect end to an all around phenomenal show. And I'd actually say by the end of it that Legend 2015 is up there alongside Legend D and Legend 1997 among my absolute favorites of the band's shows that I've reviewed so far. But now, with the year off to a hot start after Legend 2015, I can't wait to see what the rest of the year has in store for this band. See you!