Moana - A Review of Comparisons 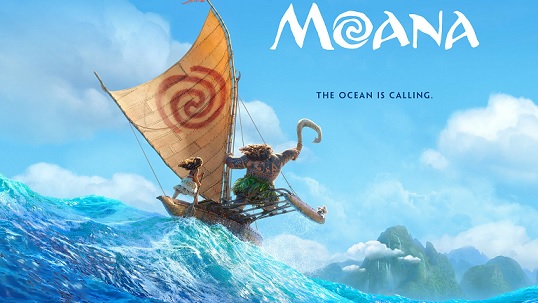 Moana is a good movie, even if it is lacking in certain areas that hold it back from being a great one. But I did like it all the same, so I just wanna get that out of the way before I start to get really critical of it, because this is a movie that reminded me of so many other movies while watching it, and also reminded me of how much better and more effective those other movies were as well.

Honestly, this month there's only been a few of movies that I've felt I've had enough to say about that would warrant writing a review for, but those instances have been movies where what I had to say was mostly pretty critical, and so I decided to hold off. But it's interesting how, the last couple movies I had in mind to discuss were Doctor Strange and Fantastic Beasts, both movies that were filled to the brim with moments torn straight out of other mediums that had pulled off those moments in a much more effective manner, and now here I am discussing Moana, the third movie this month that more or less suffers from the exact same dilemma.

(However, one of the big movies that I'm going to be bringing up while discussing this particular movie is Frozen, which is honestly why I decided to move forward with actually writing out this review as such, as it gives me a legitimate excuse to talk about Frozen even more than I already have, hehe.)

But yeah, I dunno if this just means that maybe I've finally reached a point where I've just seen too many damn movies or not, to the point where I can't even watch anything without drawing instant comparisons to other, better movies (though I honestly doubt that's the case, and the most likely scenario is that a lot of modern blockbusters really have just largely become pretty generic and unimaginative), but these elements stood out to me all the same, which I'll be discussing more in depth in a bit.

Anyways, onto the movie itself. Moana is the third musical release since Disney had their return to form with Tangled, and their second feature length animated film released this year at that. And like I opened up with, it's a good movie, overall. But it fails to reach the heights attained by the likes of Tangled, Frozen, and Zootopia, and that really comes down to just how standard and basic a movie this one is in comparison.

First, I want to discuss the music, which is pretty good, for the most part. It's main theme, "How Far I'll Go", is an amazingly powerful song that'll give you chills every time, and it's reprisals throughout are equally so. That said, as soon as it's over, it's also pretty forgettable, as is the entire rest of the music in this thing. I highly doubt that we're going to be hearing people walking around singing these tunes the way we would with the songs from Frozen, or even classic Disney musicals such as The Lion King, Aladdin, or Beauty and the Beast. Hell, they play the main theme three times in the movie (four if you count the ending credits), and I've since gone home and listened to it a handful of times there as well. Yet even so, every time it ends and I go about my day, I try to think back to how it even went, but find I'm only able to remember the emotional energy that the tune stirred up, but not the actual tune itself.

That said, even as powerful as the song may be, it's still nowhere near as powerful as the more emotionally fueled songs from Frozen, in addition to not having the staying power of the songs in that movie, either. Leaving the theater after Frozen, there were multiple songs stuck in mind, from "Let It Go" to "For the First Time in Forever" or "Do You Want to Build a Snowman". And sure, not all of the songs in Frozen were hits, but the ones that mattered landed. Where as in Moana, the one main song lands in the moment, but it doesn't have staying power, and all of the rest of the songs range from decent ("Where You Are"), to questionable ("Shiny", and to a lesser degree, "You're Welcome"). However, while the songs themselves might not be the best, I will give the movie that it actually fully commits to being a musical, which is the one single aspect that I still hold against Frozen, that it abandons the musical genre in its third act. So this movie at least has that much going for it in that regard, but I would still say that both Frozen and Tangled are far better musicals on the whole.

One other big thing this movie does that's comparable to Frozen is its humor. Like Frozen, this movie has a very genre-aware sense of humor about itself. However, unlike Frozen, that sense of humor really doesn't work in this instance. The main reason it worked so effectively in Frozen was because that movie was essentially a deconstruction of the Disney Princess genre, and so a self-aware sense of humor certainly goes hand in hand with that. But here, any and all instances of self-awareness just comes off as out of place, and only served to take me out of the movie and leave me wondering why they were even doing that, when Frozen had already covered that ground. The worst was a joke in which the character Maui mentions something along the lines of how he's going to be sick if Moana suddenly breaks out into song during a dramatic moment.

And speaking of movie comparisons, the movie even includes a scene that feels ripped straight out of Mad Max: Fury Road, even going so far as to include music during this scene that sounds like the score from Mad Max. And it was a fun scene, sure. However, in hindsight, it was ultimately a really pointless scene, as it really only served to show us just how dangerous the ocean can be, which is a fact that had already been driven home on a number of occasions by this point with scenes that were far more intimately woven into the narrative. But whatever, this wasn't that big a deal, and the scene was pretty harmless (though it is a bit of an odd choice to throw in a nod to such a hard R rated movie into something like this), and like I said, fun.

Jokes and music aside though, the real kicker that holds this movie back from greatness is the plot itself. It's really just a very basic, standard "chosen one" story, even going so far as to actually refer to Moana herself as being "the chosen one" on multiple occasions. However, every time this occurred, all I could think about was The Lego Movie, which did such an awesome job poking fun at that particular trope that it's since become just about impossible to pull it off in a movie like this and be expected to really take it too seriously, and that's certainly the case here.

But that's really all this movie mostly amounts to. There's no real deep thematic meaning or messages to elevate the movie. It's really just about walking your path and following your destiny and finding oneself, a basic plot that has been done and done to death time and time again. Which is fine, sure. A movie is allowed to be merely entertaining and nothing more, certainly. But coming off of so many recent Disney movies that do have such deeper meaning behind them, movies such as Frozen and Zootopia, one does go into a movie like this hoping for a little bit more than what it delivers, and so the fact that this movie doesn't see fit to dig any deeper and really challenge us and take us on an intelligent and emotional journey the way those movies did can come across as a bit disappointing as a result.

I don't want to just crap all over this movie, though, because it was really good. And I think its strongest element is probably its animation. This is a stunningly gorgeous movie to look at, and the water effects were simply incredible. And as Moana and Maui traveled through the sea, I often found myself fondly thinking back to The Legend of Zelda: The Wind Waker, and how Link would traverse the mesmerizingly open sea in that game. But yeah, I would say in terms of visuals, the only animated movie this year to top this movie would probably be Kubo and the Two Strings, which is yet another movie that Moana is very comparable to in terms of how the movies play out, up to and including my reaction to the two, where I found myself very much in search for something to latch onto, to really connect with the films on a deeper level, only to wind up coming up a bit short in the end. But even so, one thing that can't be denied is that the two movies certainly look great!

And the characters we follow were mostly fine. Moana is fun and slightly quirky, a strong, determined young woman whose resolve is constantly challenged, and Maui has a nice little arc where he has to come to grips with what he's become, and what he'll have to do to return to his former glory. And I got a decent kick out of his tattoos, which are actually a character all their own, as is the whole world around them really, including the ocean itself. So that was a pretty cool element to the movie, the fact that they literally resided in this very alive world.

So yeah, like I said, this was good. But really, to wrap up this write-up of comparisons, I find myself comparing this year's two Disney animated releases (Zootopia and Moana) to last year's two Pixar releases (Inside Out and The Good Dinosaur). And if Zootopia is comparable to Inside Out, with its rich intelligent themes and emotional depth that instantly struck a chord with me where I knew that I had just watched something truly special, then I would say that Moana is this year's The Good Dinosaur, a visually gorgeous movie that is definitely good overall and certainly had its fair share of stirring moments throughout, but on the whole feels a bit lacking.