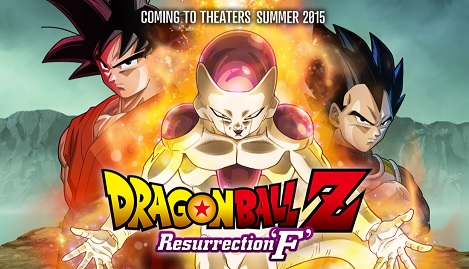 I recently watched the latest Dragon Ball Z movie, Resurrection 'F', which also marks my first time seeing one of these films in an actual theater, which was a pretty cool experience. And though the movie wasn't without a few minor discrepancies throughout, it didn't disappoint either, and even surprised me at times by its seemingly bizarre source of inspiration.

I've only recently watched all of the DBZ parody series, Dragon Ball Z Abridged, and it would appear that Dragon Ball creator Akira Toriyama has come across it fairly recently as well, as this movie feels like a direct response to that series spoofing his work. For instance, as Frieza is being revived, an eerily familiar metal musical cue hits, and I couldn't help but pause and question if I was really hearing what I thought I was hearing. But sure enough, as the chorus hit, repeating the name of "Frieza, Frieza, Frieza, Frie-za!", my curiosities were confirmed, as Frieza's ringtone from the Abridged series was being used in this official release.

But even beyond that moment, much of the writing also feels directly inspired by the DBZ Abridged series. There are jokes throughout that feel lifted almost directly from the series, such as Android 18 proclaiming, in all sincerity, just how cool a guy Krillin is, or Tien arriving on the scene and making a joke about leaving Yamcha behind due to his not being powerful enough for the approaching battle. And the pacing, too, feels less like a 90 minute movie and more like a full blown arc in the anime condensed down to a typical movie runtime, again, much like the Abridged series.

I just found this aspect sort of fascinating, and it's pretty cool to see the original creators themselves seemingly take inspiration from a fan-created parody of said series, and incorporate those elements on an official level, to the point where there would really be no need for the guys at Team Four Star to even tackle this movie for their series. But even beyond all that, what I really enjoyed quite a bit about this movie was how, in the end, it still remained true to its base source and maintained that classic Dragon Ball Z feel, and actually felt like the canonical entry that it's intended to be.

I was especially able to appreciate that aspect about it after having watched the previous canon movie, Battle of Gods. In comparison, Battle of Gods feels like something the filler writers woulda chalked up. With just about every single major character acting out of character throughout, and featuring an overly-goofy tone, even during times where such a tone just didn't feel appropriate, Battle of Gods wasn't terrible, but as a movie actually worked on by Toriyama himself, it is a bit of an embarrassment. Resurrection 'F' is the exact opposite, however, feeling like a genuine entry in the series, and bringing that classic Dragon Ball Z feel on a cinematic level.

Now, there are a few minor gripes I had with the movie, mostly concerning the handling of the side characters. For one, there are some major inconsistencies with the main series as it concerns power levels. Gohan and Piccolo are especially sidelined in this regard, which is a bit of a shame, as these two characters, Gohan especially, should definitely be at a place by this point where a threat such as Frieza (at least in his pre-Golden form) shouldn't prove nearly so overwhelming.

But on the other end of the spectrum, Master Roshi is actually brought in to take part in the battle against Frieza's forces, and while I realize the character was always intended to be far stronger than one would expect, for him to be keeping up against this caliber of foe (who I can only assume are at least around Raditz level of strength), then I must ask, just where in the fuck was Master Roshi during the Saiyan Saga way back when? And speaking on the battle against the Frieza Force, while there were some nice fun moments throughout, it did overstay its welcome a bit by about a good ten minutes.

And there was also a point during the main event against Frieza where, once it becomes apparent that Goku and Vegeta are essentially just toying with him and treating the fight as a training session, now that any real threat has essentially been eradicated and yet the fight is still continuing on regardless, I was left asking, at what point does this fight then become entirely pointless?

But honestly, those gripes really are fairly minor, and the movie did more good than bad, and was really enjoyable for the most part, with the actual fight against Frieza being quite entertaining throughout regardless. Visually, the animation is updated and definitely feels like an improvement upon the main series, and this especially shows during the fight scenes (though there are also times where it straight up looks like footage from one of the video games), as well as Frieza's endgame attack, which is just an awesome visual. And, while it was initially a bit odd to see such characters as Goten and Trunks be completely left out of the movie entirely, I also appreciated how the movie didn't feel the need to parade the entire extended cast on screen for their token cameo, and was content with scaling things down in that regard.

So yeah, all in all, I enjoyed this. I dug how it feels inspired by the Abridged series in its approach, yet still managed to mostly maintain the classic feel of the main series. And though I did come away with a few gripes, seeing how worse things could be with Battle of Gods really put things in perspective, and I found Resurrection 'F''s misgivings to be far more forgivable in comparison. But either way, it was just kinda cool seeing a Dragon Ball Z movie on the big screen, and especially one that features a classic villain's return such as here, making it feel like all that more genuine an experience. So if you're a fan of the series in any way, then this one is definitely worth checking out.