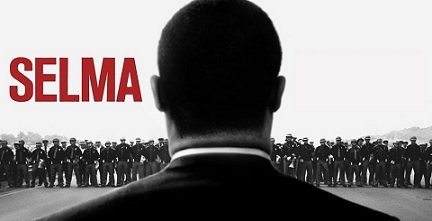 There are plenty of good movies out there of various genres that cater to various tastes, and that's all good and all. But if there's one movie out there right now that should be a required viewing for everybody in today's society in America, regardless of taste, then Selma is that film. Selma is the most important new movie out there today.

Now, I'm not one to throw around the word "important" in regards to movies too often. In fact, I usually scoff at the notion. For instance, by no means did I agree with the sentiment in regards to last year's 12 Years A Slave. It was a great movie for certain (even despite boasting the most bizarre abuse of Inception music to date), but not one I'd necessarily deem a particularly important watch, if I'm being completely honest here. But not only do I genuinely believe Selma to be a better movie than 12 Years A Slave, I also believe it to be far more relevant to today's society, as it bears an extremely important message that many people in today's culture could definitely learn a good thing or two from.

One of the reasons I believe the movie works so well is because of how focused it is. Where as other recent, similar movies such as The Butler, or biopics like Jobs or J. Edgar, fail to engage due to their broad and generalized approach, trying to show us a little bit from every key moment of their subject's life that ultimately leaves us with little more than a paper thin idea and little in the way of actual substance, Selma instead chooses to focus on one specific event in Martin Luther King's quest for equality. And in taking a far more focused approach, this allows for the events transpiring to really play out and resonate, leaving a powerful impact with the viewer, rather than merely acting as a sidestep onto the next key note.

This movie seriously hits hard. And while it's easy for movie's like this to go overboard into insincere sentimentality, this movie plays out in a way that feels truly genuine. And a lot of that comes down to some genuinely great performances by most of the cast, especially David Oyelowo and Carmen Ejobo as Martin Luther King, Jr. and his wife, Coretta.

In fact, the way MLK's character played out in the movie was another big contributing factor to lending this movie a sense of sincerity. They don't pretend to paint MLK as this absolutely perfect historical figure who could do no wrong, but rather, they actually show him to be quite a vulnerable person. They humanize him, and in doing so, make him relatable to us on a human level. This movie shows him having doubts, and it shows him making absolutely shameful mistakes along the way. This is a man who's very much fighting a battle within himself just as he is in the name of justice and equality. And in showing him persevering over his own shortcomings in order to make a difference for all makes his journey to be all the more empowering to bear witness to.

And this movie's message on how to go about achieving change is precisely why so many people need to see this movie. And not just watch it, but actually pay attention. There's so much wrong with the way we react to injustices in the world these days, and if Martin Luther King were alive today, he would be seriously shaking his head in shame at the way much of our society has turned out in that regard.

But not only does this movie strive to show us the way towards achieving change, it also acts as a warning to those enacting their injustices, to be wary of their actions, less they fall on the wrong side of history. So this movie really couldn't have released at a better, more relevant time than now, so that we as a society may look upon it and take a lesson from our not too distant past.

So yeah, I thought Selma was absolutely incredible. And quite frankly, I have no idea how something like 12 Years A Slave can go on to win awards while this meanwhile gets passed over in favor of experimental art projects like Boyhood (though it remains to be seen if the Oscars will repeat the Golden Globes' mistake there). This movie is far more important than something such as those movies, as it is far more relevant to today's society, and bears with it a message that everyone can learn from.

I wrote last week about my bewilderment of people applauding a movie as the credits roll, but such an applause has never felt more appropriate or deserved than when my audience clapped at the end of this film.