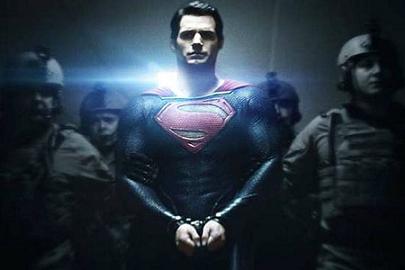 Man of Steel feels like the product of two minds at work that aren't quite in sync. It was early on that I began to have concerns regarding this film, particularly when the early action scenes were filmed in shaky close-ups and quick cuts more akin to a Christopher Nolan film than anything we've seen from Zack Snyder. And for the majority of the movie, this very much feels like a Nolan film that just happens to utilize a more Snyder-ish color palette. However, later on, once Snyder's finally allowed to actually unleash his slick trademark style on us is when this film begins to excel, but by that point it almost feels like it's too little too late.

The movie wastes no time getting right down to business, as the planet Krypton is about to be destroyed, and the newborn Kal-El is sent off to Earth. We then join Clark Kent in adulthood as he kinda wanders about in life, trying to find his place in this world, all the while constantly reflecting on his life growing up as someone clearly not of this world, which we witness in the form of flashbacks. However, once Lois Lane joins the scene and attempts to uncover the truth behind Clark Kent is when the story finally begins to move forward, as the ghosts from Kal's past catch up with him in the form of General Zod.

In many respects, this movie feels like two films spliced together, and they don't initially appear to compliment each other all too well. As mentioned, the majority of this film tonally feels very Nolan-ish, and it's these parts that nearly cripple it. I knew going in that the movie was going to take itself a bit seriously, but it's almost overbearing at times. And while a self-serious and clinical approach definitely works for a character like Batman, I'm not entirely sure that that's the case here, and I actually feel that a little more of Snyder's more usual camp would have gone a long way to improve the film, particularly given how over-the-top this thing eventually gets near the end. The movie is also ridden with tons of exposition, which is, again, very much a Nolan trait. However, while Nolan has been able to seamlessly interweave his exposition overload into movies such as The Dark Knight and Inception, Snyder clearly has trouble implementing it without making the movie feel bogged down by it. There were a number of times where I wished they'd just stop explaining stuff to us and let the visuals speak for themselves.

Some of the technical aspects of the movie also felt a bit off. For instance, there are several scenes where the camera is very fidgety, to the point that it actually becomes distracting. And I'm not talking about action scenes here, I mean, in a scene with just two people sitting on the back of a truck talking to each other, it'll be hard to pay attention to what they're actually saying because they somehow couldn't manage to just keep the damn camera steady at all. I really don't even know what was up with that, but it was obnoxious. But generally speaking, the film does look great even if it's not always shot great, and the film's score was also quite impressive, as the drums really beat a motivating sense of life into the movie.

Some of the editing felt really choppy at times as well, but though none of these issues prevailed throughout the entirety of the movie at least, they were prevalent enough to where they did become very noticeable. In fact, that's kind of my biggest gripe with this movie is just how inconsistent it felt. Because, while these issues certainly drag the movie down, there are also moments of sheer brilliance on display here as well, and I can't help but wonder just how good this movie could have been had Zack Snyder been allowed to really let loose and direct this thing his way more often than is evident.

While early action scenes had me worried that Snyder was gonna be working on a leash this whole film, they gladly let him do what he does best with the bigger action sequences later on in the movie. These scenes are as slick and smooth as ever, and the action is crystal clear on the screen. It's also really big and loud, and at times almost more resembles something you'd expect from an Incredible Hulk movie. The level of destruction is astronomical, as entire towns and cities are pretty much left in absolute ruins as a result of the high impact fights that Supes puts up with Zod and his cohorts. But where destruction of this magnitude always kinda bothered me in a movie like, say, Batman Begins, it actually kinda works here, and really gives the fights a truly big and otherworldly feel.

I was also impressed with the acting pretty much all around. Michael Shannon played a great villain in General Zod, and brought a sincere level of depth to this man who is knowingly in conflict with what's morally right, yet still feels that his way is in their best interest. And his battle of ethics with Kal's father, Jor-El, played by Russel Crowe, was actually somewhat fascinating to watch, as Crowe brought a calm sternness to his role that counteracted Zod quite well. And when speaking of action scenes, Antje Traue steals most of the scenes in this movie as Zod's cocky, badass ally.

There were times when it felt like there was a bit too much of Lois Lane, as she always happened to either show up or be called upon, even in scenes where her presence didn't feel entirely all that necessary. However, Amy Adams did a good enough job in the role where her constant presence wasn't always a deterrence, so there's that. And Henry Cavill also did a decent enough job in the red cape, considering what he was working with. There are certainly issues with the character, who feels, as mentioned, a bit too serious and reflective at times, and is probably a bit too much of a tortured soul, but these are issues that lie in the writing, and Cavill did the best that we could probably ask of him, all things considered.

So this movie was kind of a mixed bag, though in the end, the more it sinks in, the more the positives tend to outweigh the negatives. And while it's still a problematic movie in the moment, it's not until you have a chance to reflect upon the film as a whole after the fact that it really starts to come together, which is actually sort of fitting. And I think a lot of that comes with pre-conceived expectations, as I went in really wanting this to be another great Snyder outing, yet it's clear as day that Nolan had his hands all over this thing, and that Snyder was brought on board mainly just to direct a Nolan film rather than bring his own touch to the table. So in that sense, I suppose it's also somewhat fitting that so much of the promotional material features Superman in handcuffs, as the movie very much has a restrained feel to it as a result. But where I'd be really interested in a sequel where Snyder's not clearly being held back throughout most of it, I do feel that this first attempt will only improve upon subsequent viewings.