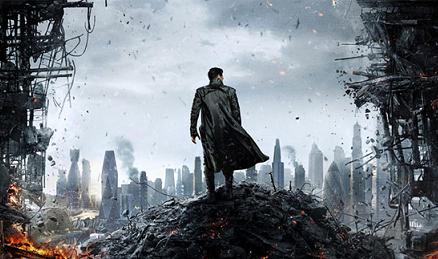 J. J. Abrams' previous Star Trek film was the first time I ever actually enjoyed anything Star Trek, and it left me wanting more. However, after seeing his follow-up, Into Darkness, I think I'm pretty good for now. Don't get me wrong, the movie isn't bad. It's actually quite enjoyable. And yet, even as a non-fan of the series, I couldn't help but feel the movie relied far too heavily on referencing elements from the series' past rather than trying to come up with a whole new original story all its own.

We rejoin the cast from the previous movie as they chase after Benedict Cumberbatch, who plays a mysterious terrorist who's targeted the Starfleet. The movie is well acted all around, with everyone really settling nicely into their characters, with standouts including Zachary Quinto's Spock and Simon Pegg's Scotty, who's given a lot more to do this time around. And Benedict Cumberbatch is unsurprisingly great in this movie, as he has been in everything he's done to date. But great as the whole cast was, no one impressed more than Karl Urban. He had a handful of good lines in the first movie, but like Simon Pegg, he's given more to work with here, and dammit man, he completely steals the whole damn show in the process.

In addition to the cast, the real star of the movie are the thrilling action sequences. Whether it's ships crash landing on Earth, or Kirk and Cumberbatch zooming through space without any sound or musical accompaniment, or hell, Cumberbatch in general just basically owning everyone and everything in sight (because he's just that bad ass), the action in this movie is almost always a spectacle. That said, almost every single one also includes a convenient "just in time" last minute rescue of some sort, which did cheapen the tension a bit as the movie went along.

And speaking of cheap, that brings me to my biggest issue with the movie, that being its over-reliance on re-creating classic moments from the series' past. It just felt really cheap, and even having not actually watched the original Star Trek films, it got to the point where I couldn't help but feel like I had already seen this movie before. It very much lacked any sort of identity of its own, which is a bit of a shame, as I feel that was kind of the whole point of rebooting the series in the first place, wasn't it? To start anew do new things with the franchise? And speaking on the reboot, even elements from that movie are revisited here, as Kirk is demoted early on and has to prove himself to be a competent captain all over again. We've already seen this story before, so was it really necessary to do it again?

I also don't really understand the title of the movie, "Into Darkness", as the tone never really feels all that dark at all. The film as a whole generally maintains the exact same fun, light hearted tone as the first movie, and never really delves into any particularly dark places for too long. Now, lately, a lot of film franchises really have taken darker turns as they went along. The Dark Knight somehow made Nolan's Batman movies even darker than they had begun. Revenge of the Sith truly turned Star Wars to the dark side. And the Harry Potter movies had a nice gradual descent into darkness as those movies progressed as well. But here? Not so much.

It feels like false marketing in that regard, like they just wanted to cash in on this whole "darker is better" trend going on, but without actually following through with it. And yeah, Iron Man 3 essentially did the same thing with its marketing too, but it at least stopped with just the trailers. They didn't put their false advertisement in the title of the movie itself. But I digress, and this isn't even really an issue with the movie, so much as me just scratching my head as to why films feel the need to bill themselves as being all dark and gritty, even when they aren't in the slightest. And especially coming off of pure fun mega hits like The Avengers, do advertisers still think that people don't want to go to the movies just to see some good ol' fashion fun? In fact, it's probably to this movie's benefit that it maintains a fun, light hearted tone, as all of those cheap, cheesy moments would have been much harder to forgive if the movie also decided that it wanted to take itself too seriously on top of everything else.

But anyways, as I mentioned, it's a flawed and unoriginal movie, but it's still enjoyable nonetheless. The performances shine, and the action is fun, so as long as you're able to look past the fact that this movie is completely devoid of any form of imagination or original thought, then you'll likely have a decent enough time with it. That said, I'd prefer to see something new next time.