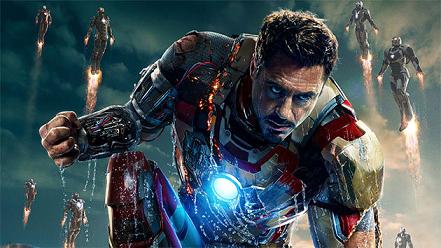 So, is Iron Man 3 the best Iron Man yet? I think so! Now I was a bit skeptical going in, particularly after trailers started showcasing the multiple Iron Men scenario, which brought back bad memories of the travesty that was Iron Man 2. However, director Shane Black takes this movie in an entirely different rout, elevating this series pretty much on par with last year's The Avengers.

As it would turn out, the multiple suits wasn't the only deception played on us by trailers. The previews going in would lead us to believe that this was going to be a much darker, grittier Iron Man, but that really couldn't be further from the case. This movie is an absolute blast from start to finish, and essentially acts out as a full blown action-comedy throughout its duration. And Robert Downey, Jr. is definitely on his A-game, giving us his best performance as Tony Stark to date. His delivery has always been spot-on, but he somehow manages to outdo himself this time around. His comedic timing and line delivery is just masterful, and he definitely makes the absolute most of the awesome material in which he has to work with.

And I can't stress enough how fantastic the writing in this thing is. There are so many twists and turns that you will not see coming at all, and are oh so totally satisfying to watch play out. Some characters might not be quite who you think they are, and on more than one occasion I found myself legitimately concerned for the fates of certain characters. This is a movie where it really felt like anything could happen, and that's something that's really been missing in a lot of movie as of late.

But where the movie really excelled for me was in its climactic action sequence, which is quite honestly the most creative action scene I have seen in a long, long long time. Prior to this scene, I certainly enjoyed the hell out of the movie, but wasn't sure I'd quite rate it higher than the first Iron Man movie. But once this thing got started, oh boy was I sold. I was truly impressed with the way they played with the multiple Iron Man concept, which, as I mentioned before, was one of my biggest concerns going in. But this scene was truly something else, something fresh, something I don't believe I've ever seen before, which is, again, something that is really missing in a lot of movies these days.

I mentioned before how RDJ brought the goods, but he wasn't alone in the acting department. Ben Kingsley was a blast, and Guy Pearce has finally given us an Iron Man villain truly worth basing a movie around. I wasn't too sure at first about going with a bit of a fantastical rout with his powers and all, given that the prior Iron Man films focused so much on technology over super-human abilities, but it was something that I was able to grow to accept, and it ultimately lead to probably the best and most memorable villain in these Avengers movies to date (after Loki, of course!).

This movie also introduces us to the Iron Patriot. Now, I was a bit confused by the decision to cast Don Cheadle as Norman Osborn, especially given that he was already playing a different character in War Machi... oh, wait, the Iron Patriot was War Machine? Ah. Gotcha. Well okay, nevermind then! But in any event, Don Cheadle was also on his game in this film, much more so than last time. But really, all I could think while watching him was that, somewhere, Terrence Howard is sitting back watching this and just thinking to himself: 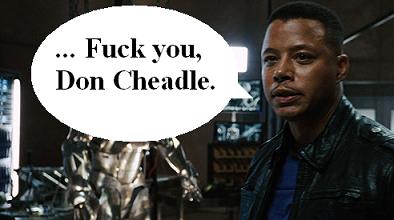 In addition to the main cast, the side characters also left me very pleased. For instance, when Tony crash lands his Iron Man suit and is forced to break into someone's house to repair it, he meets a kid, who I was certain I was going to hate. But the dynamic between these two was just so wrongly awesome to watch, with Tony saying the most inappropriate things to the fullest comedic effect, and the kid carrying his own in return. And Pepper Potts has a really interesting development here as well, though some of those developments do honestly lead to a couple of fairly cheesy moments (but damn does Gwyneth Paltrow look hot in a sports bra!).

This is a movie where, despite Tony Stark being in a darker place in his life and trying to deal with the stresses of being a super hero, the movie still manages to remain light hearted and fun all around. And in that department, this movie is a total success. From start to finish, this movie is hilarious, creative, and unpredictable. Though, that said, while joking with my friend during the credits about what should be the after credits scene, I actually managed to totally call it, which made that scene so much funnier for us than it probably actually was. But yeah, definitely stick around after the credits for this one, and as if I have to even tell you, you really need to see Iron Man 3.