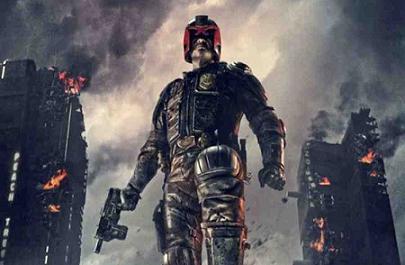 I went into Dredd expecting it to be just another dumb fun action flick, but what I got was so much more than that. From start to finish, Dredd was a freaking tremendous movie. The visual effects were gorgeously gory, and the non-stop action was among the best I've seen this year.

In this world, Judges act as the law enforcement who have the power to act as judge, jury, and executioner. The plot sees Judge Dredd evaluating a potential new Judge, who has psychic abilities, as they respond to the murder of three at the slum tower called Peach Trees. But once they arrive, they find the place is under control of a drug lord known as Ma-Ma, who puts the place on lockdown, forcing the Judges to fight their way through an entire tower of criminals who are out to kill them. In many respects, the synopsis is very similar to The Raid. However, where that one was about the violence progressively devolving to a more primal level, this one goes the opposite rout, constantly upgrading with bigger and badder artillery around every corner.

Karl Urban is Judge Dredd. He just breaths the character to life. He's a man who abides by the law to the fullest extent, and hands out punishment to any who break it. And he's a man who takes his job so seriously that, no matter how bad their situation got, he's always reminding the rookie that her evaluation was still under way, which I got a good kick out of. But just everything about him, his scowl, his rugged voice (Christian Bale could have learned a thing or two from Karl Urban), the delivery of his one-liners, this guy has got the Judge down pat.

I also found that the supporting cast all played their parts well. The villain, Ma-Ma, was played by Lena Heady, who definitely channels her inner-Cersei to deliver the kind of calm crazy that we've come to expect from her. You can definitely buy all these macho gang members falling in line at her command. And Olivia Thirlby played Judge Anderson, the rookie under evaluation, who felt out of her element in the best possible way. She looked absolutely stunning in this movie, giving off a vibe that reminded me of Samus from Metroid: Other M. And her telepathic scenes were definitely an interesting touch. In particular is a scene where she enters the mind of their captured suspect, and they exchange a series of increasingly morbid thoughts of one-another in an attempt to mentally break the other one down.

As I mentioned before, the visuals in this were a thing of beauty. Taking place in a post-apocalyptic future, the scenery has a very rough and gritty feel to it. But through the grittiness, there are times when moments of brilliance shine through. This is mostly whenever we see the characters under the influence of a new drug that makes it seem like time is moving in slow motion. During these sequences, the action is slowed down in a way that I can only describe as euphorically violent. And the finale kicks that euphoric feeling up a notch, ending with an angelic, almost even heavenly sensation that left me mesmerized.

I found this stark contrast almost fascinating. The way the world changes from grim to marvelous under the influence, it's no wonder that the people in this world are after such an escape from their reality. And yet this escape always comes back to bite them in the ass, turning bad situations into something so, so much worse, which I definitely appreciated (don't do drugs, kids!).

But as I said before, the action only gets bigger and badder as the movie progresses. Other than the slo-mo scenes, we see the weapons get more and more powerful, and as a result, more and more of the building gets turned to rubble, and the casualties pile up quick. They don't play around at all with this movie, this is definitely a fun but bloody affair.

I honestly wasn't expecting to enjoy this movie as much as I did, but I thought this was great. The best action movie of the year thus far, and something definitely worth spending your money to see. It's just such a shame that this movie is apparently being set up for failure at the box office. At least in my town, the theaters are only playing a handful of shows per day, and at some of the most inconvenient of times at that, which really just sucks. But if you do get a chance, and if you're a fan of action, definitely go see Dredd.