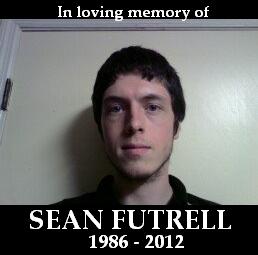 So, as is typical for me to do, I decided to go over to Barnes and Noble and use their internet during my lunch break. But while online, I sadly made a very untypical discovery. Sean Futrell, one of my best friends since middle school, has passed away. And ever since that discovery, I've just felt numb all over. I don't even know what to think, really. He was just a few days younger than me, far too young to be taken away from us already. And I had just seen him only about two weeks ago. He seemed in decent enough health at the time, and I never would have imagined that that night would be the last time I'd ever see him. Had I known, I would have said to hell with sleep and stuck around longer. Makes me think of all the other times I dipped out early, or failed to return his calls for whatever reason. Over the past few years we hadn't seen that much of each other, though we always spoke of the need to spend more time together. Damn does this feel like a wake up call...

Like I said, I've been friends with Sean since middle school. We hung out with the same group of kids all throughout high school, and we always got together on weekends to either party or play Halo, or just hang out and do stupid shit. Hell, I was just on a date last week when the story of how we drove around with Sean in the trunk of my car got brought up. Basically, way back when, I was hanging out at the movie theater over by Best Buy with my buddies Sean, Sabby, and Fudd. Somehow we got the bright idea to put on a show for the people waiting in line to purchase their tickets. We pretended that we were kidnapping Sean, screaming obscenities at him as we tossed him into the trunk of my car. We then drove around with him in my trunk, giving him a good ol' ride as we did donuts and such around the parking lots at the movies and Best Buy. I guess we put on a convincing enough act, as it wasn't too long before the cops pulled us over. The funniest part about it was that not only was I, the driver, placed face first on the ground, but Sean, the "victim" in the crime, was also put face first on the ground right beside me. God, those were the days. We did so many stupid things, but at least we had fun doing it.

But Sean was a cool guy. He had his own ideals that weren't always necessarily popular ideals, but he lived his life by those ideals, which I was always able to respect about him. And he was one of those kinds of guys who, even though we weren't always into the same kinds of things, we could still just hang out for hours anyways like it was nothing. I'd let him go on his long talks on subjects that I just could not give two shits about, such as cars, or World of Warcraft, and then he'd turn it around and give me shit for being into something else that he's not into. But it was always cool.

I don't want to get into too many of the personal details, but I'll just say that he's had kind of a rough life. Yet at the same time, he was always able to carry a carefree attitude about himself, like no problem was ever too big to bring him down and keep him there. He was the kind of guy who thought realistically. And realistically speaking, despite all the hardships, I'd like to think that he had a good life, if entirely too short.

In the years after high school we did grow apart. Yet despite that, he was one of the few who, every once in a while, I always wanted to make that extra effort to catch back up with. We weren't the closest of friends, and I can only imagine what his closer friends and family are going through right now. But I keep thinking of all of the other kids I've known growing up who were taken from us at such a young age, and this one definitely hits the closest to home. He wasn't just a face I knew from the school hallways, or someone who was more of an acquaintance than an actual friend. No, Sean was my friend. And he was a damn good one at that. And I'll definitely miss him.

You left this world far too early, Sean. I know you don't believe in the afterlife and all of that, but I'd like to think that, wherever you are now, you're in a peaceful place. I love you, Sean Futrell. We didn't spend enough time together, but I will always cherish those memories from the time that we did have. Rest in peace, buddy.
Posted by Chris Widdop at 1:40 PM