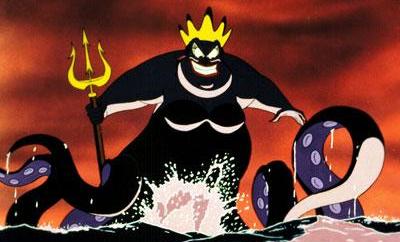 So while hanging out with some friends the other day, we were talking about some of our earliest memories, including what the first movie we saw in theaters was. Now, I'm not entirely sure that it is, indeed, the first movie I saw in theaters, though the first movie I remember seeing was The Little Mermaid. Specifically, I remember how much it terrified me. When Ursula grows into that giant monster at the end, I turned around in my seat in tears. I guess that was some pretty frightening imagery for a three year old. But it got me thinking a little about some of my other theater experiences. Not so much about the movies I saw, but about what actually transpired inside the movie theater. And so, with that, I'm just gonna go ahead and start talking about some of the more memorable theater moments that stick out to me. 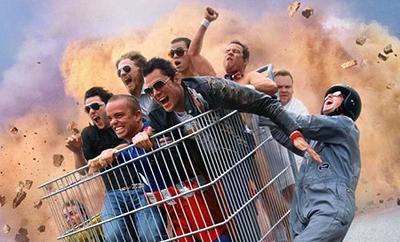 Even if the movie's bad, going to the movies with a group of friends is still almost always a guaranteed good time. One of the first times I went to the movies with a group of friends was when I invited my buds from elementary school to go see Independence Day for my birthday. We sat in the front row (because we were young, stupid idiots), and as the credits rolled, we ran around the theater proclaiming that we had just saved the world. And it was awesome.

Fast forward several years, where me and my high school friends all decided to go see Jackass: The Movie on Halloween night. We pretty much had the place to ourselves, and after the movie ended, we decided to do some of our own jackass stunts in the empty theater (because we were young, stupid idiots).

Still more years later, with my friends I've made through the writing group, we all decided to ditch our little post-National Novel Writing Month party early in order to go see Tangled, where some of my friends decided to sing along to all of the songs throughout the movie (because we were... drunk, stupid idiots!). Thankfully the other people in the theater appeared to have gotten a kick out of it, too! 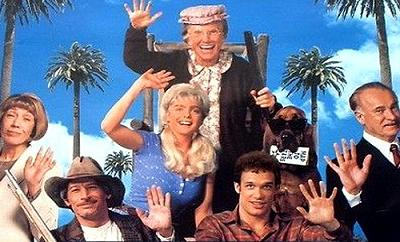 While seeing movies with friends is always fun, some of my fondest memories actually come from seeing them with family. When I was younger, my Mom usually took us to movies. It was pretty rare for my Dad to take us to the movies, but the few times he did really stood out. I remember seeing The Beverly Hillbillies with my Dad. We went to this weird theater that was sort of like a mix between a bar or a restaurant and a movie theater. It's the only time I ever recall going to that theater, too.

But I also ended up seeing the second two Star Wars prequels, Attack of the Clones and Revenge of the Sith, with my Dad as well. And one of my Uncles happened to be in town when we saw Episode II, so he also tagged along, which was pretty cool. I remember how he had to explain to my Grandpa afterwards that these movies took place before there was Darth Vader. 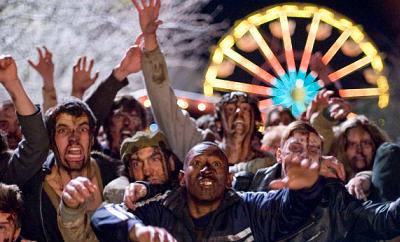 An awesome crowd can enhance even the worst of movies. Case in point, House of the Dead, hands down one of the worst movies I've ever seen. However, the crowd was well aware of this, and we spent the entirety of the movie tossing insults at the actors on screen and mocking the action taking place. We took a horrible movie and made it a legitimately entertaining experience.

Of course, while an awesome crowd can make a bad movie enjoyable, it can make a good movie that much better. Sitting in a theater with fellow fans cheering on at the action on screen really is something else. Some of the best crowds that I've had the pleasure to sit in include The Expendables, Ghost Rider: Spirit of Vengeance, Grindhouse, Puss in Boots, and Team America: World Police. Also, watching Zombieland was especially fun in Tallahassee! 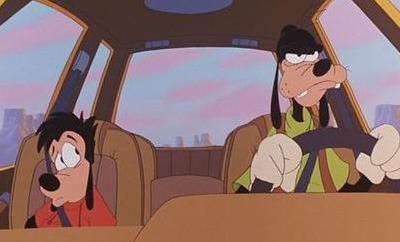 You really had to sit there?!

On the contrary, not all moviegoers are necessarily good company. My earliest "bad crowd" experience would probably be A Goofy Movie. The theater was mostly empty, it was just me and my family, and then several rows up, a couple of other guys. Yet those guys were so obnoxious. One of them had the most loud and annoying laugh, and they were laughing throughout the entire movie. Even when nothing funny was happening. I'm sure they had a wonderful time, yet their incessant laughter was so disruptive that it ruined the entire movie for us.

I don't think I've ever had near as bad an experience since then, though there's been a few that have left me truly wondering. For instance, and I have a friend who has brought up this point, but why is it that, as people enter into a mostly empty theater, they feel the need to sit close to the people already there, as opposed to spreading out?

Now, annoying as it may be, it's not necessarily something that kills the movie most times. For example, in Sherlock Holmes: A Game of Shadows, in a mostly empty theater, somebody decided they just had to climb all the way to the back row, where I was currently the only person sitting, and sit in the seat right next to me, as if they were a friend who was joining me for the movie or something. This did bug me a bit, and I even asked him why he felt it necessary to sit there. But he calmly explained that it was the best view of the screen, and so I just shrugged my shoulders, said okay, and proceeded to watch the movie with this odd stranger sitting next to me. And honestly, it didn't really hinder my experience whatsoever.

That said, there's been a couple of times that have really left me unnerved. In 127 Hours, in a theater that didn't have stadium stacked seats, some inconsiderate big-haired bitch decided that she just had to sit in the seat directly in front of me, despite the fact that literally every single other seat in that row was free. I moved over a seat, but still, what the hell was going through that stupid bitch's mind to think that that was okay?! And then again, just a few months later during Moneyball, and again in a mostly empty theater mind you, some old couple decided to sit in the seat directly behind me. Nothing wrong with that necessarily, until they proceeded to spend the entire movie chatting with each other and shuffling around in their seats. Or, rather, I assume they continued for the whole movie, I ended up moving about halfway into it. But really, they could have sat anywhere, and knowing that they were going to be acting stupid and clearly be a disturbance, they just had to sit directly behind somebody else in the theater? What assholes! 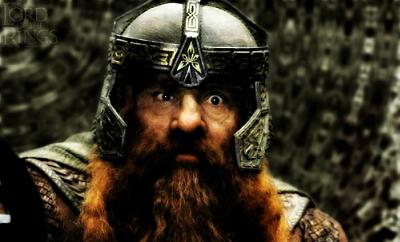 Sometimes I'm not the one having a bad time at the theater, though. At least two times stick out for me where one of my friends in particular really wasn't appreciative of the crowd in attendance. During The Lord of the Rings: The Return of the King, when Legolas takes down the elephant and lands in style, the crowd in attendance applauded their approval. My friend, however, didn't appreciate this applause, and in turning to complain to me about the crowd, he ended up missing the best part, "That still only counts as one!"

The other time he got really upset was during Sanctum, in which the people sitting to the side of him were apparently talking. I couldn't hear them, though, so I wasn't bothered by it. However, I would have my turn yet again just a few months later, as some dumb bimbo sitting next to me during X-Men: First Class nearly ruined the whole movie for me with her constant moving around. She seriously wouldn't sit still for a damn second, and it was a constant distraction, one that my friend poked fun at after his own recent experience. 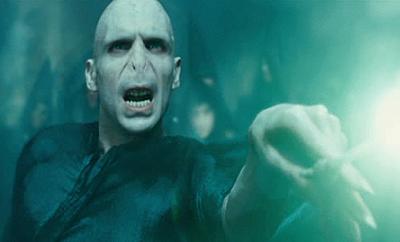 But sometimes we're the assholes...

As much as I complain about other people in theaters, I gotta admit, sometimes either myself or the group I was with was to blame for diluting everyone else's good times. One of the first R rated movies I was allowed to go see was Scream 2. And about halfway into the movie, I really, really had to go to the bathroom. But I was stubborn, and I didn't want to miss any of the movie, and so I sat there fidgeting throughout the rest of the movie, which I'm sure was quite the distraction to those around me.

That wasn't the worst, though. I ended up seeing Snakes on a Plane with a friend and one of his friends. And at some point during the movie, his friend decided to kick the seat in front of him, shake it, and look down and verbally scold the person sitting there. To this day I don't have a clue what that guy did to warrant such treatment.

The most recent example of our assholery would come before Harry Potter and the Deathly Hallows: Part 2, in which me and a friend sat there and essentially saved about half a row of seats as we waited for our other friends to file in one by one. Yeah, we were those people. The people around us were less than pleased, and I was certainly less than comfortable. 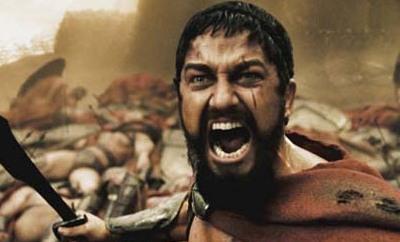 During Hercules, my friends who had already seen it were trolling us throughout the whole thing, taunting about how they knew what was gonna happen, and they weren't gonna tell us!

I was a little annoyed by the guy sitting next to me during The Punisher who, throughout the movie, felt the need to loudly call the villain of the movie a "fag". And he would always drag the word out, so it was more like "faaaag". However, in hindsight, I actually really got a kick out of that guy!

The first time I kissed a girl was after we saw the latest Mark Wahlberg movie, Four Brothers. I know, romantic, right?

Watching Doom at the movie theater on Paris Island was something else. An entire theater filled with Marines screaming at The Rock on the screen. No, Rock, they're not soldiers, they're Marines!

I went to see 300 twice with one of my friends. During the rape scene, he decided to spout out that "that's in the booty hole!" Both times. And both times the audience laughed.

And I don't usually condone sneaking into movies without paying, but when my buddy in the army came to town last winter, we spent an entire day in the theater. The fact that we didn't plan it at all is what tickled me so much about it. We just walked out of Tower Heist, glanced at what was playing in the theaters on our way out, and just nonchalantly walked into J. Edgar. We also saw Immortals before the day was done. God we're dicks!

Anyways, I could probably go on all day thinking up individual memories from my time spent in the movie theater. But I thought this was an interesting topic to tackle for a little bit of a change. And hopefully you all found at least some of this interesting, and might be reminded of some of your own memories, both good and bad, at the movies.
Posted by Chris Widdop at 9:11 PM