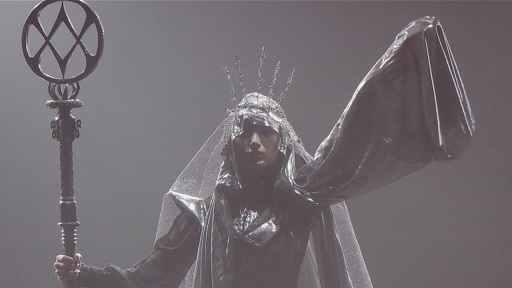 We move on now to Su-metal's hometown of Hiroshima, where we're set to celebrate her 20th birthday in the most epic way possible with Legend S, an event which surpasses Wembley as the band's longest one-night show. In addition to being a celebration for Su, this show is actually notable for two other big reasons, those being that this would be the first show to not feature Yuimetal, and it would also be the last show to feature Mikio on guitar before he would tragically pass away the following month.

But not to linger on a down note, the show begins in full theatrics, as Su-metal steps out of the mouth of a massive fox head and onto a small circular stage surrounded by giant fox heads facing outwards towards the audience (where the bulk of this evening's performances would take place on, as the stage would at times move up and down the center aisle). Then a group of fox warriors grab hold of a pair of chains attached to the stage, and they pull her across the aisle to the main stage on the other side of the venue, where the music kicks in, and we're introduced to the band's new introductory track, In The Name Of.

This is the only song of theirs to feature no vocals by any of the girls, and even the choreography is pretty minimal, as we see Su at times stamping her staff against the ground, and at other times slowly waving it from one side to the next. This song is mostly for spectacle, and an excuse to show off the band's elaborate costume designs. And it's another song of theirs that's taken some time to really grow on me, but I've come to dig it quite a bit. The guitars are just awesome, and the death voice's vocals are especially sick time time out, particularly when he almost sounds like a fox growling at certain points.

This particular performance was done by Su alone, and featured those fox warriors banging along on these big tribal drums throughout, as the lights would obey Su's every command and followed along with the wave of her staff. This was just such a cool way to introduce this new track, and it leaves me excited to see what other creative ways the band can find to incorporate this song into their set in the future, similar to all the awesome ways they've found to incorporate Babymetal Death. But what an epic performance, and an epic way to start the show!

And it only gets more awesome from there, as they jump into a fiery rendition of Ijime, Dame, Zettai, and already my eyes are starting to well up from excitement. We see now that on this evening, the girls are dressed all in black, and the Kami Band have finally changed up their own wardrobe as well, sporting an all black look themselves. And we see right off the bat how the performances are generally going to look on this evening with just Su and Moa up there, which is a bit off balance with that empty spot that Yui would normally occupy just left wide open (this was before they would introduce backup dancers to work around Yui's absence).

And where in future shows, either Moa or Su would sing Yui's parts depending on the song, for this show, most of her lyrics were just left out entirely, so there were a number of empty spots in the vocals throughout the evening where the girls just left that spot blank before resuming with their own vocals. The first time this is most noticeable is during Gimme Chocolate, where Moa would do her part, then there'd just be silence as she stands there and waits to resume with her own lyrics, though the fans did their best to fill in for Yui, singing her parts during those empty gaps. So yeah, certain aspects to their performances on this night are a bit strange to both see and hear. However, as the show goes along, you do get used to it.

We move on to the band's first pair of solos, and during the dueling guitar solos for Akatsuki, Su rushes up the stairs on the main stage to combat against a masked foe in a brief little fight dance, which we haven't seen her take part in since Legend Z. And then after this brief skirmish, man, just looking at the expressions on Su's face, you can just see how much she's really pushing herself as she's belting out this song, really giving it her all to put on the best damn show possible.

And then we get to GJ, and this now marks the moment when Black Babymetal's songs have officially become Moametal solos. And this night in fact is the only occasion in which Moa actually had the stage entirely all to herself, without even any backup dancers around her or anything, and I tell you, she more than carries her own out there.

I mentioned in my Big Fox Festival review how I'm never not gonna gush over just how bad ass Syncopation is, and you're damn right I'm standing by that! And on this night, throughout the song, they kept cutting the lights to this really deep, dark red, which helped give this song this real sinister edge on top of everything else. And Su's death glares only added to that edge. So awesome.

Then seeing a sea of people pumping their fists through the air and singing along to Meta Taro got my eyes welling up again. And by the end of this song, I found that I had been smiling so hard that it was actually hurting my face again. I can't think of any other band that has so consistently had that effect on me. And god I love this song live!

The eyes started welling up again just during the video hyping up our next song, and as soon as No Rain, No Rainbow kicked in, it was over for me, as my eyes were raining tears. This performance even features a live pianists and violinists, in what is undoubtedly the definitive version of what I consider my personal favorite Su-metal solo. She gives the absolute performance of her career here, and comes out looking like a superstar in front of her hometown. You can just feel the emotion in her voice, and that emotion hits you right in your core. This is just such a touching, beautiful rendition, as the crowd was left in a quiet awe, until they uproared with applause at the end.

But it's time to wipe away those tears for now, as we jump back into some more fun with Song 4! And this song features one of the few exceptions in the evening where Moa actually did sing and dance Yui's parts. I guess they figured it would've been a little too awkward for her to pretend to be hiding behind an invisible Yui for an extended period of time.

During Headbanger, Moa may not have had her smoke gun handy, but that was okay, because those giant fox heads had her back, as they came to life and proceeded to breathe out smoke through their mouths and into the crowd, making for a really awesome effect. And on this special night, while this song is normally about a girl celebrating her 15th birthday, Su altered the lyrics to reflect her 20th birthday, which got a huge pop out of the audience. And you could hear how much this little change really pumped everyone up, as there was an added level of intensity in the crowd's chants for the remainder of the song. So that was a really awesome little detail they did for this song on this night, and I loved how Moa was already mouthing along with the updated lyrics (please tell me they'll let Moa sing this version of this song for her own 20th birthday in this coming year!).

I had alluded to this evening's performance of Babymetal Death in a previous review when discussing the different ways the band has utilized this song over the years, and on this evening, it was used as a super dark lead-in to this show's closing number, which we'll get to in a minute. Now, on first viewing of this show, I actually thought that they had piped in Yui's vocals during her parts where she's introducing herself, but on this rewatch, it appears as if Moa is actually singing her parts, which is an interesting choice (she's certainly dancing Yui's part at least).

Similar to Legend 1997, after a certain point in the song, a group of hooded individuals make their way onto the stage, and they proceed to crucify Su once more (by my count, marking the fifth time we've seen her crucified on one of these big shows), this time onto a giant XX symbol that has been so prevalent throughout the show. And the stage is then set aflame, as Su lets out her bloodcurdling scream, and Moa's left running around the stage until Su disappears.

However, unlike Legend 1997, this show doesn't end with Su's sacrifice. Rather, the lights all go out, and as the spotlight shines down, we see her step onto the smokey aisle newly reborn, and adorned in a magnificent golden dress and with a large crown on her head, looking like a true Queen. And as she's accompanied by a soft piano, Queen Su slowly makes her way to the fox stage, where she performs a slower, softer rendition of The One.

But then the song kicks in proper, and we see that Princess Moa has joined her Queen, making her way to that stage dressed in a similar attire, where the two resume the song in its more traditional form, looking like true royalty in front of their loyal followers. They then step back off for the main stage, where they make their way back up the stairs and exit through an open door at the top, signalling the closing of yet another chapter in Babymetal's lore.

All in all, this was an excellent show. And I love how, similar to Legend 1997, this show really upped the ante in terms of its theatrical presentation, and how they brought back a lot of elements from past shows as well, making the show feel like a celebration of Babymetal's history in addition to being a celebration of Su. It's a bit of a shame that the Kamis couldn't have been more utilized throughout, as none of their songs that feature their individual solos were performed on this night. And Yui's absence is perhaps more felt on this show than on any other, which makes it hard to review this show without bringing her up quite often (though her absence on this night and the way that Su and Moa worked around it does make for one of the most unique Babymetal experiences). However, despite these setbacks, this is still an outstanding show, one of the band's best, and one hell of a birthday celebration, if I do say so myself.

And so with that, I'm all caught up now, and this now marks the end of my reviews of the band's bigger shows (until they get around to officially releasing their next one, that is). However, I did want to share my thoughts on the band's journey through 2018 as well. So join me next time, as we'll take a look at their most recent year, and all of the changes the band has had to endure in order to keep moving forward and power through the unfortunate circumstances that they would be dealt early on in the year. See you!