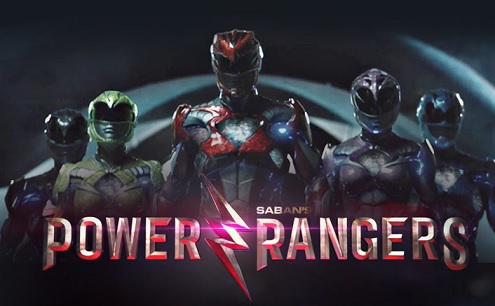 So I went into the new Power Rangers with extremely low expectations. I did not like what I saw in any of the trailers at all, or the direction they appeared to be taking the franchise, and I thought this looked like just another dreary, generic, uninspired reboot. But then the movie came out, and I proceeded to hear a lot of positive buzz around it. And so I checked it out myself, and what d'ya know, I actually really dug the hell out of it, and it's as of now one of my favorites of the year so far.

I was a fan of the show for a time when it first aired. I was really into it during it's initial run with the original cast, but then once the cast changed for the first time, I sorta lost interest, and the show didn't really stick with me in a nostalgic light the way it has for others. But even so, I do recall the series, so I was able to recognize a number of the references in this movie throughout, but also the number of creative liberties that it takes with its source. And honestly, most of the changes this movie makes are among some of the reasons why it struck such a chord with me.

The movie places a huge emphasis on teamwork, and understanding one another in order to work towards a common goal. And all throughout, you'll notice how honestly, the movie spends the majority of its runtime building characters, and really allowing us to get to know them. We start off with Jason, a former high school football star who's sorta lost his way and has started acting out. The movie's pretty subtle in its approach here, as we learn bits and pieces of his past, and then see brief visual cues as to what lead him to his current situation and mindset. And I found this really effective and satisfying, and we see similar builds for all the rest of our colorful cast as they become introduced into the story.

But as the movie progresses and our heroes train to become the new Power Rangers, we learn that the way that they morph in this movie is by placing their priorities on one another, as opposed to themselves. And this aspect is one of the most striking in the film, as our cast honestly spends most of the film unable to actually become the Power Rangers. In fact, one of my favorite scenes in the movie comes when the group all just sorta kick back around a campfire and take a break to really get to know one another.

They started out as a group of strangers who barely knew anything about each other aside from their names, but it's not until they really learn about one another on a deeper level, and grow to appreciate each others company and place their fellow teammates before themselves, that they're finally able to morph and become the Power Rangers. And this is a lesson that not only our young cast must learn, but even their mentor, Zordon, who has lost his own ways in his older age, must also re-learn this lesson in order to both find himself and really bring the team together. Zordon is far more humanized here as compared to his portrayal in the show, and I loved how they made him this grumpy old man who looks down on the younger generation, much like you commonly see all the time in real life, only to gradually see their value and learn to place his faith on them to carry on where he left off.

In this way, though, the film sort of reminds me of last year's big sci-fi hit Arrival, which actually received a Best Picture Academy Award nomination for its efforts. A big message of that movie was learning to communicate with one another and bringing people together so that they may work towards a common goal for the betterment of humanity as a whole. And this movie offers a similar message. It is only by communicating and really learning about one another on a deeper level, and learning to place our comrades before ourselves, that our true power emerges. And only through working together can we achieve our goals to help save humanity. And this movie accomplished this same goal in a big cheesy action blockbuster flick about the freaking Power Rangers of all things, no less.

I enjoyed Arrival, though I didn't fall in love with it like a lot of people did. I thought it was a fine, solid picture, but not really something that necessarily touched me, like it did so many others. But where Arrival didn't quite resonate too strongly with me, this movie honestly did. And maybe that's because it's just this big cheesy action movie that happened to offer up such a powerful message that it worked for me, as opposed to the more serious and "important" approach of Arrival. But this movie really did work for me, and I definitely think there's a real heart and soul to it, and it offers up something that the current generation watching it can really learn a valuable lesson from, which is the farthest thing from being just that dumb, mindless, and misguided action flick that I was expecting going in.

But while the campfire scene may be one of my favorite scenes in the whole movie, the scene that sticks most with me is when the Megazord emerges in the big action climax. Specifically, when they first try to use it, but then it stumbles, and they have to regroup and learn to cooperate with one another in order to properly operate the massive zord. What struck me so much about this is that it's almost precisely a scene ripped straight out of a work in progress script of my own.

This past winter, I've been playing with another film idea, toying with it here and there whenever I've had time to work on it, and it's ultimately a film idea that actually covers a lot of the same themes covered in this movie. And actually, the big climax of the original draft involves almost the same scenario, as it takes the cooperation of the people involved in order to get their bodies to properly move as they should, stumbling at first, before they can finally learn to work together.

Granted, that was the original draft, which was honestly a script where the majority of it consisted of an extended political debate that all lead to this moment and more. However, after becoming especially put off by political talk as of late, I have since decided to go back and remove all aspects of politics from the script, and as it stands now, it's quite possible that the new draft would work as a silent film, all while maintaining the same themes and message. Funny how things work, and how a project can evolve (or morph?) over time, going from an on-going conversative piece to a silent film with absolutely no talking at all. Perhaps there's something telling about that?

But anyways, the fact that I've already changed so much about that original draft makes me feel comfortable talking about it here, and also gives you an idea as to why this film really worked for me on the level that it did. Because it was almost as if this film was working on the same wavelength as my own mindset with its execution, and I just really dig it anytime I see stuff like this, sorta like seeing my own vision already being captured on screen in moments like this, even if it came out of someone else's head.

So yeah, like I said, I really dug this movie. Its emphasis on character over action was refreshing, and the new takes on these classic characters was also quite satisfying. I've mentioned Jason and Zordon, but I also really loved the new takes with all the rest, too, from Billy's more autistic quirks, to Rita's new backstory that really connects her to the Power Rangers on a deeper and more tragic level. And even Alpha 5 is actually kinda cool this time around, showing capable of holding his own during sparring sessions with the Rangers-in-training.

I went in with low expectations, but came out extremely impressed with what I saw. Sure, it's still silly, and you can certainly pick apart the plot and all of its conveniences throughout. But I don't think the film's really about that. It's about the characters, and about the message of working together towards a common goal, and I thought that was really cool, especially to see in a movie like this that's been made for both kids and adults alike, who are coming into this from a nostalgic frame of mind. But it's not overly preachy with its messages, and remains a whole lotta fun throughout, so I definitely think this is an overall worthwhile film that's definitely worth checking out. Fans should love it, but even if you're not a fan, I think there's enough here to really appreciate and enjoy all the same.