So this past Friday, May 20th, a film of mine was screened in a movie theater for the very first time. The film was Breathe, the horror short that I filmed last year, and it premiered at the debut event of Tallahassee Premiere Nights at All Saints Cinema, a new event run by Tally Shorts with the promise of showcasing local movies by local filmmakers every other month.

They contacted me a couple weeks prior to the event, asking if I'd like for one of my movies to be shown, and I of course accepted, though I had to decide which one I wanted to showcase on this occasion. I was initially torn on which film to go with, either Dream Girl or Breathe, as they both had their positives and negatives I felt. On the one hand, Dream Girl is probably the more overall solid film, however, it's also a little simple, almost too simple perhaps. And on the other hand, Breathe is probably the more interesting film, certainly the more ambitious, but it's also the more problematic, what with the car scene that perhaps drags on for just a bit too long, and the sound issues that are impossible to predict (the movie sounds perfectly fine on a computer, however, it sounds terrible anytime we've tried to play it on a TV).

And so I turned to the internet to see what everyone else thought. And yeah, the vote was pretty mixed. It's sorta funny, but almost everyone I actually know in real life, friends and family and such, all unanimously said Dream Girl. However, all of my internet pals sided with Breathe. And, well, I guess in the end I agreed with Team Breathe's reasoning more, that a more interesting film will have a better chance of standing out, despite any apparent issues, and so I decided to go with that. Not to mention I couldn't help but be curious as to how it would play in a theater, if the sound issues would persist in that environment or not, and so I guess my curiosity got the better of me on this occasion, and I decided to go with the riskier option of the two. Sorry, friends and family!

But yeah, so I was really nervous going into the screening. The show was set to present four different films, and they were kicking things off with my own. And, well, it certainly was an experience. I mean, it was just pretty cool seeing a film of my own playing on the big screen, in a theater full of people there to watch it in silence. I'm happy to report that the sound in this environment worked flawlessly, so that was a huge load off! And on top of that, it was just really neat being surrounded by an audience watching a film that I made, and hearing them react to it, chuckling at certain moments in the dialogue, gasping at all the right times. It was just an absolute treat, and a very satisfying experience.

After the four films played, they called all of the directors to stand in front of the theater and do a quick Q&A, which was also pretty fun. I learned that, as has often been the case with this film, about half of the audience didn't quite understand it, and as I vaguely tried to explain a few things, hearing the murmured "aha" reactions of the audience was really rewarding. And afterwards, I was briefly interviewed by a team filming something for their school. And yeah, really the whole evening was just a real cool deal, seeing this room of people really take us all seriously and genuinely ask us questions in earnest about our craft. A very cool experience indeed. 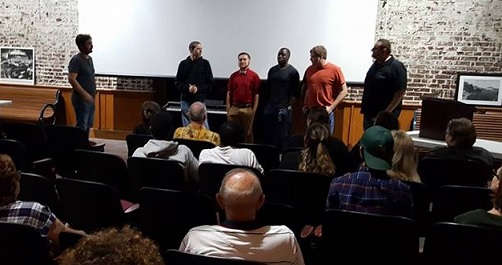 So yeah, that was my first time seeing one of my movies on the big screen. Another milestone reached in my ongoing journey as a filmmaker. And on top of that, my film appeared to be received relatively well at that, which I couldn't be more proud of. It's also cool to see that Breathe, in fact, plays well in a theater, so I'll feel more confident moving forward should I decide to enter it into any other screenings, though I'm thinking of giving Dream Girl a shot at perhaps a future screening, so we'll see.

But yeah, I'm really grateful for those who showed up and came out to see the films and show their support, most notably the ever dependable Simmons family and a new filmmaking collaborator of mine Nicole who both showed up for the event, and I also definitely appreciate those who reached out in some other way to show their support elsewhere. And also a congratulations to the other filmmakers at the event, who impressed me with their own work on this evening as well.

If I'm being completely honest, I do wish that perhaps some of the others involved with the actual film would have shown some enthusiasm for such an occasion, and it's a little disheartening that a number of them didn't appear to care at all that a film that they had worked on was making its theatrical debut (not everyone, mind you, but those who did know who they are). Because this achievement really is just as much theirs as it is mine, and I couldn't have done it without them, so I really do wish that they would perhaps be a little more proud of their own efforts, if nothing else. But alas, I can't control how much people care one way or the other, but even if there wasn't as much internal support as I would've hoped for, the support from everyone else really has been absolutely incredible, and I'm very gracious for all of it!

So yeah, all in all, this really did turn out being a great experience. It makes me feel like a real filmmaker, like I'm heading in the right direction, and I'm just ecstatic to get back to work on more new things and get some more of my films out there and shown in theaters. This is just one more step in the long journey ahead, but it feels like a big one, and I couldn't be more excited for where things are going from here. So once again, thank you to Tally Shorts for running this event, thank you to the All Saints Cinema for screening mine and everyone else's films, thank you for everyone who came out on this occasion, and thank you to everyone else who continue to show their support in this monumental endeavor of mine. That support really does mean the world!