I usually don't pay the general critical consensus on a movie much mind, as many of my favorite movies have been panned by critics. So I went into this thing with an open mind, thinking it looked genuinely interesting based on trailers and such, and having enjoyed most of the Wachowski siblings' other movies. However, sadly, it would appear that the critics are right on the mark about this one. Jupiter Ascending is nothing more than a steaming piece of dog shit. 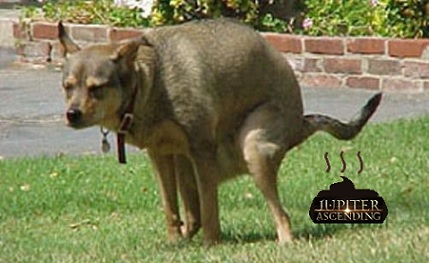 Reportedly, when this played at a recent film festival, there were a lot of walkouts from this movie, and I gotta say that I can completely understand, because my god was this movie hard to sit through. I can't even recall the last time I was so antsy at the theater, just praying for it to roll credits already.

And I can't even tell you why I bothered to stick it through to the end. Maybe just to see if it would ever get better? After all, there were two specific exchanges between its stars (Mila Kunis as Jupiter and Channing Tatum as some sort of human/dog hybrid person thing) that I especially enjoyed, and that happened back to back. The first involved a joke where Jupiter wanted some privacy to change her clothes, alluding to a weird scenario from earlier in the movie, and which had some nice comedic timing from Tatum. This was then followed up with another nice little moment between the two and a joke about Jupiter loving dogs, which actually got a good chuckle out of me.

It was around this time that the film started to give me some hope of perhaps having a bit of a turnaround, and I was open for it to wind up being perhaps something decent after all. However, immediately following these two moments, we're then sent on a tedious montage segment of sorts in which our characters keep running back and forth between legal departments to try and make Jupiter's royal heritage official. And after this little departure finally wraps up, Jupiter cracks a joke about never complaining about having to go to the DMV after having gone through all of that, and I couldn't help but agree more. I would gladly visit the DMV over sitting through this shitty movie again any day.

I mentioned the previous scene as being tedious, and really, that word can be used to describe most everything else in this god forsaken thing, not the least of which would be the action scenes. I swear, they just drag on and on and on, and they're so sloppily pieced together, with so much going on so quickly that you can never really register quite what's happening, which isn't aided at all by the fact that they're all so god damn boring that I found my mind wandering against my will constantly. It is very possible that the action scenes in this movie are the absolute most mind numbing and incompetent action sequences that I have ever seen in any movie. Ever.

And the writing, god, lines such as "You're my own personal Jesus Christ" from The Matrix are subtle compared to some of the schlock we get here. The freaking aliens flat out name drop Cinderella and Beauty and the Beast, for those of you in the audience too dumb to pick up on some of the "inspirations" (god does using this word to in any way describe this movie make me cringe) behind this plot. And wooden delivery of lines such as a commander telling Channing Tatum to "aim true" will just leave you sighing and rolling your eyes in agony.

But god damn, there's so many stupid and pointless aspects to this movie, I don't even know where to begin. Maybe with the damn bees...

... which is how we initially discover that Jupiter is really of space royalty, by the fact that she can apparently control them. Except, after this initial scene, they literally do nothing else with the bees. No, really, nothing at all. They never return again, they're just randomly there to randomly deus ex machina Jupiter to royalty, and just as randomly disappear for the remainder of the movie. Seriously, why give this girl the power to control bees, and then proceed to do exactly nothing with that?! What is the point?! And this isn't even a one-off occurrence, as the movie introduces several seemingly important characters and plot elements all throughout, only to then completely abandon them without any sort of resolution.

But returning to our royal heroine, Jupiter is also just about the most useless character around, playing the damsel in distress who Channing Tatum has to race to save at the very last second, shit, I forget how many times throughout the entire course of this thing. I mean, not only is this movie a redundancy of just about any other sci-fi flick or space opera you may have seen, it's a fucking redundancy of itself!

Speaking on those other sci-fi flicks for a second, hell, have you seen any of them? Any other sci-fi movie ever? Well then good, then you should be well prepared for what to expect from this movie in terms of its visuals, because this just looks like an absolute mish-mash of every sci-fi movie out there, with some of the least inspired designs this side of the galaxy. The god damn Green Lantern movie (another movie I'd much rather watch again than this) had more inspired character designs and locales than what's seen in this dump heap of science fiction rejects.

And then the movie contradicts itself by having Channing Tatum literally riding a spaceship from the outside to another planet. This was dumb as hell, sure, but from this happening, we should at least be able to ascertain that surely this means Tatum's character can breath and survive in space, right? Except, no, that's not right, because later on, when he's ejected from a ship into the vacuum of space, he desperately scrambles to fit himself into a spacesuit so that he doesn't suffocate and/or freeze to death. Er, 'kay, way to keep consistent there, guys.

And don't even get me started on freaking Eddie Redmayne's character. I'm not even gonna blame that on the actor, though, that comes squarely down to some truly shit direction with what they gave to him, having him speak in "ominous" (emphasis on the quotations there) whispers, only to burst out into screams at absolute random. It was a level of over-the-top that wasn't even entertaining to watch, just groan inducing, like you couldn't believe that you were actually seeing this shit play out like it was. Unbelievable.

Oh yeah, and Sean Bean doesn't even die. I swear, only the worst movies like Silent Hill: Revelation and this shit actually let Sean Bean live. I mean, really, what the hell, how do you fuck that up?

Okay, I might not be too serious about that last offense, but as for the rest of this thing, well, let's just say that I had the urge to chuck my drink at the screen on so many occasions throughout, because this movie was just infuriating. There were no stakes to be had at all, because the movie gives you no reason to give a shit about anything, despite the mountains of expository lines being spewed out at any given moment. No, the only thing this movie gave me was a god damn headache.

If I'm being fair, I should admit that the lead performances from Kunis and Tatum were perfectly fine for the most part, and the sound design was pretty admirable as well. But honestly, that's about all the praise I really have to give this thing, which really has nothing else going for it at all. And after coming off such a strong year for science fiction movies last year, to have to start off the new year with this, well, it's a little disheartening, to say the absolute least.