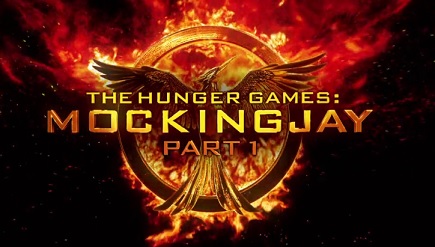 Oh boy, where do I even begin with this movie? The latest Hunger Games movie may not have been nearly as rage-inducing as the previous one, quite the opposite in fact, as this one ended up leaving me giggling all throughout, though all for reasons that were entirely unintentional by the movie. This is a movie that falls into that ever infamous category of movie that's almost so bad that it's actually kinda good in a way. That's right, The Hunger Games: Mockingjay - Part 1 is kinda, sorta, an awesomely bad movie!

Now here is a movie that tries so desperately to stir your emotions with scenes of horrific destruction, yet it's all just so forced in such a way that I couldn't help but quietly laugh to myself. For instance, no matter what Katniss says or does, it's almost always followed up by a hammy shot of Philip Seymour Hoffman bragging her up and throwing himself a personal little party, as if what she said or did was such a wow-inducing moment or something. And it doesn't matter what she does, he always has this proud little look on his face that just left me snickering.

And what's even more funny about all of these such scenes is that Katniss herself is just the absolute worst. I'm sorry, I know that Jennifer Lawrence can be a good actor, but my god is she awful in these Hunger Games flicks. Her acting is so forced and over the top it pulled me out of the movie on more than one occasion, and she's at her absolute worst anytime she's supposed to be trying to convey some sort of traumatic emotion. I don't even need to get into the ridiculousness of some of her character's actions in the movie itself, a better actor could've sold this material easily, but Lawrence really doesn't cut it at all in these films, and her performance is just laughable (whenever it's not cringe-inducing, that is).

But holy crap is this movie desperate to try and move you. Scenes such as Katniss randomly singing some stupid ass song that I guess is supposed to be motivating (which, by the way, is it even actually possible for someone without a tongue to whistle?!), or scenes where we're supposed to watch in awe as everyone stands up and gives that goofy little three fingered salute, just scream of desperation, begging for the audience to please feel something. But in reality, the only thing such scenes managed to move was my eyes to the back of my head.

In fact, to give you a real good example of the kind of emotion this movie was actually stirring with me, when we reached a scene in the movie after a city is attacked, Katniss points out at some fire behind her and literally utters the words that this brewing war is a "fire catching". And oh man, when this happened I could barely contain myself, and, well, this gif essentially summarizes my exact reaction to that scene and its subsequent replays:

The movie was also littered with a number of really strange consistency errors. Like, there's a scene where President Snow essentially says of the resistance, "No, don't call them criminals, call them radicals," which is then followed up not even five minutes later by him publicly and explicitly referring to them as criminals. Or later on, when trying to come up with some sort of resistance propaganda scheme, they decide to send Katniss out on the battlefield and emphasize that she shouldn't wear any makeup. Again, not even five minutes later, out she is on the battlefield, with a full face of makeup intact. It's like, how did nobody seriously catch so many such instances of this sort of obvious error?

But I dunno, perhaps that was just me being overly nitpicky, but man did this sorta thing stick out to me. But even so, by the end of it, I had a hard time really hating this movie, and actually kind of found myself enjoying the act of mocking it throughout. Though it should say a lot that my favorite scenes all involved an orange cat who happened to share a striking resemblance to Zeke from The Red Scarf. That said, a scene where they're playing with the cat, making it chase after a light, was honestly probably made all the funnier if only because this scene acted as a nice unintentional callback to the new Night at the Museum trailer that preceded the movie, which just so happened to include that exact same cat gag in it.

The fact that the movie's not too long also definitely works in its favor, as I'm not so sure I would be even nearly so favorable to it right now (if you can even call my reaction favorable) if I had to sit through another half hour or so of this nonsense. And like I said, maybe it's because I was expecting the worst, but this movie wasn't anywhere near as bad as Catching Fire (in fact, I've been pretty lucky enough to avoid seeing a single movie as bad as that one since), though it's still nowhere near as good as the first movie, either.

I know that mine isn't going to be a popular opinion in regards to this movie, but whatever. By this point you all already know whether or not you're going to see this thing, so you don't need my recommendation either way to sway your decision for you. But for me at least, all in all, The Hunger Games: Mockingjay - Part 1 was the most obnoxious, insincere, self-contradicting nonsense I've seen all year, and I can't wait for Part 2!