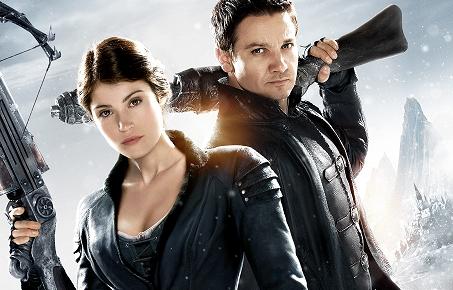 Oh my, this sure was something! The classic tale of Hansel and Gretel has been brought to the big screen, and boy is it packin'! This movie follows Hansel and Gretel after they've grown up to become famous witch hunters. And by the end of the movie you might be left wondering just how in the hell these two actually managed to survive to adulthood in this line of work. But just so long as you remember to turn off your brain upon entry, then you'll be sure to have a blast in the meantime.

This movie really was something else. Pretty much, it's as ridiculous as the premise suggests. And it's a bloody, gory affair all throughout, with the movie finding new and inventive ways to either blow up or squash somebody's head every five minutes or so. Hell, the action sequences are even more over the top than I was expecting. But what's more impressive is how the movie somehow manages to one-up itself in levels of absurdity with every passing scene. I really knew I was in for something special when the first big action scene saw our two leads chase off a witch who essentially ran on all fours like a dog, for no apparent reason at all. But crazy as that was, it's nothing compared to what the rest of the movie throws at us, for in addition to the action, the witch designs themselves become more and more bizarre as the movie progresses as well. They start off with your typical ugly old witches, but the further along we get, the more grotesque they become.

I mentioned before how you might question how these two managed to live so long, and the reason I ask that is because, well, quite frankly, for people who have been doing this whole professional witch hunting thing their whole lives, Hansel and Gretel kind of suck at their job. Poor Hansel spends the majority of the movie getting shoveled in the face and dragged all over the place by witch after witch, and I lost count of the number of times that Gretel gets kidnapped. In fact, if it weren't for all the help they received from their various stalkers, they probably wouldn't have even survived past the halfway point. And yes, you read that right, these two both have their very own stalkers (in fact, Gretel manages to get two stalkers!). And yes, it is a bit creepy to watch at times. But Hansel and Gretel eventually warm up to them and put them to good use, and it's just as well since, like I said, it'd likely be a much shorter movie otherwise.

As ludicrous as the movie is, it's very aware of itself, and the cast seem to be enjoying themselves quite a bit as such. Well, everyone except for Jeremy Renner that is, who I still can't decide whether or not he's just embarrassed to be a part of this at all. But he at least plays his part well, and he and Gemma Arterton, who plays Gretel, have some seriously awesome one-liner delivery throughout. But either way, if there's one thing that's clear, it's that Jeremy Renner gives absolutely no shits in this movie, which was a joy all its own to watch.

But yeah, if nothing else, this was definitely a fun movie. Yes, it's stupid and ridiculous, and it's filled to the brim with logic flaws. (Like, for instance, why did they clearly start that big ritual at the end at like 6:30 in the morning instead of earlier in the evening if it was no good once the sun came up? Either that, or that battle scene lasted for a hell of a lot longer than they made it out to be!) But no, it's just one of those movies where you really shouldn't try to put too much thought into it and just enjoy it for what it is, else your head might be like to burst.