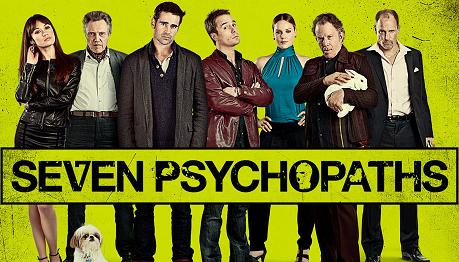 Yeah, I wasn't expecting this at all. Seven Psychopaths is made by the same guy who brought us In Bruges, and as good as that film was, he completely ups the ante in every way with this one. Seriously, this film took me completely by surprise by just how good it was.

The premise sees us following Colin Farrell as he's trying to write a movie script about seven psychopaths. Only, he doesn't want it to be just any typical film about psychopaths, with lots of gore and violence, he wants to try to approach it from a different angle, a more peaceful angle. But as he writes, his script essentially begins to come to life, as he finds himself in the middle of an ongoing pursuit involving several actual psychopaths, and it's all over a little Shih Tzu.

The writing is very clever, and defies convention at every turn. The film even goes so far as to point out its own flaws, which in the grand scheme actually manages to strengthen the movie as a whole. The dialogue is just so well written, almost like something out of a Tarantino flick. And the way the story plays out, jumping between Farrell's movie script and the real world, was smoothly implemented, very stylized.

I also don't think I've ever laughed so hard at such brutal violence in a film before. This film gets really bloody really quickly, and yet almost every single time a gun is fired and leaves a bloody mess behind, it's done in such a hilarious manner that you can't help but laugh at it. This is a really dark comedy in that sense, but the comedic timing is just spot on throughout.

But more than anything, this film is a showcase of some phenomenal performances from its ensemble. Colin Farrell gives another good outing, but he's really overshadowed by the cast around him. Woody Harrelson was a blast, playing the main antagonist of the movie who is madly in love with his pet dog. And Christopher Walken delivers probably his best performance in years. But the real star of the show was Sam Rockwell, who just killed it in every single scene that he's in. He plays Farrell's crazy best friend, who wants nothing more than to see Farrell succeed in his endeavors, even if it means putting everyone in some ridiculously deadly situations. I mentioned the dialogue of this movie, but Rockwell definitely has the best lines in this thing, and a lot of that really comes down to his awesome delivery. He just gets so into his character, he's just an absolute nut.

Seriously, Rockwell deserves an award for his performance. And in fact, I really hope that this film doesn't go overlooked come awards season, because this was definitely a legitimately great movie, and one that deserves some recognition. From start to finish, this film impressed, and everything gets tied neatly together by the movie's end. So yeah, this definitely shouldn't go missed.