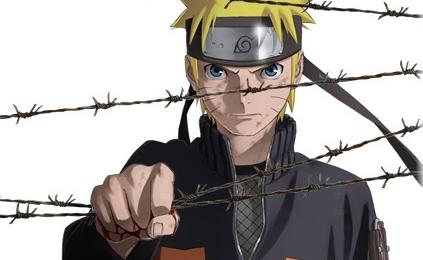 So last night I decided to catch up on the two latest Naruto movies that I hadn't seen yet, Blood Prison and Road to Ninja. And while Road to Ninja is the first Naruto movie where Naruto writer, Kishimoto, was heavily involved in, the opposite couldn't be further from the truth with Blood Prison. It was clearly written by someone who's never seen a full episode of the anime or read a single chapter of the manga, and has an only limited idea of the story based on watching a handful of key scenes or looking at a sporadic choice of key panels in the manga. This movie doesn't just contradict canon, it flat out breaks several of the rules of how this world works that have been well established in the story. So, as an avid fan of the series, it was a frustrating experience to sit through. Though that's not to say that it's poorly written in general, as, taken on its own merits and removed from the series, it's actually a pretty decent movie.

The story is basically that Naruto's been framed for murder, including the attempted murder of the Raikage, and has been sentenced to imprisonment as punishment. Once he's imprisoned, we learn more of the backstory revolving around an ancient box that requires a sacrifice in order to be utilized to grant its wielder power, and the darkness that lies within it. I actually kinda liked how this one took Naruto away from the rest of the usual cast and placed him in this solitary situation, as he attempts to break out of prison and clear his name. In that sense, it was a nice change of pace, and Naruto's actual character was handled fairly respectably enough, especially compared to how overly goofy and idiotic the anime writers tend to usually make him in non-canon material.

Where the issues come is in how many of the events that transpire just flat out don't make any sense, and really show just how unknowledgeable with the material the writers are. For instance, they clearly saw Naruto wearing that bad ass red cloak of his when he debuted Sage Mode in his fight against Pain, so they figured that, hey, that cloak must be a side effect of entering Sage Mode, right? Because literally every time Naruto enters Sage Mode, the cloak will just magically appear on him in a puff of smoke. And, well, that's not how it works. Sure, Naruto looked awesome in that cloak in the series, but there was a reason behind him wearing it during his fight beyond just looking cool, and he originally wore it along with a big ass scroll, which he carried so as to be able to summon his clones to the battlefield (another inconsistency, as Naruto is just magically able to summon his clones to his side as well in this movie, an ability that he doesn't posses in canon, and is even explained in detail within the context of the series in which this idea was taken from). So the cloak actually serves a purpose in the series. But here? They gave him the cloak because someone thought it looked cool, and clearly also thought that it was surely a part of his transformation, which is just silly.

They also mixed up the way in which one of his signature finishing moves, the Rasenshuriken, is supposed to work in execution. His completed version of the move works in a way where it completely decimates its target, literally wiping them out of existence on a cellular level. However, the writers confused this with the earlier, incomplete version which Naruto used against Kakuzu in the series, which merely breaks down the cells in its victim without actually erasing the victim out of existence. Now, for someone who's only vaguely familiar with the material, this is an easy enough mistake to make. However, for someone writing an official movie based on this series, it's a sloppy and inexcusable mistake that shows a complete lack of care for the source material. And even with getting the moves mixed up, they didn't even fully comprehend how the move they accidentally used actually works, as the characters who get hit by the it are still able to get up and move around after the fact, which should be flat out impossible.

Considering that they messed up so many things with the main character himself, it shouldn't have come as a surprise that they botched up elements pertaining to the history of the world itself as well (such as the Grass Village apparently existing before the village system was ever even invented). So there's those kinds of inconsistencies all throughout this thing, including several other examples that I won't bore you with, but that'll frustrate fans of the series to no end while they're watching. And even as far as fitting the movie into continuity with the rest of the series, it technically takes place before the war, yet Naruto already knows Bee, which is impossible. Now, this isn't that big a deal, however, up to this point, they've actually done a decent job of fitting the movies in with the continuity of the ongoing series, especially compared to some other anime movies, so to see them really start to fumble this late in the game is just a bit of a shame.

However, all that said, if I were to watch this movie as a non-fan of the series, I'd actually have to say it's a pretty decent flick. And it's dark as hell, too. The designs of the new characters actually aren't that out of place within the Naruto world, and are pretty well written at that, with quite a bit of depth to a lot of them. And since the movie removes all the side cast of the main series, it also gives them a chance to really flesh these characters out and allow them a chance to grow on us. And some of the twists this movie takes are actually pretty surprising, too.

As far as the animation goes, this was pretty solid stuff for the most part. Silliness with the magic cloak aside, the Sage Mode battles were pretty entertaining. And I was actually shocked at the sheer amount of gore on display in this thing. I mean, the main series does have its bloody moments from time to time, but good god, this was rated R levels of gore spraying around. The movie more than earns its title of Blood Prison, that much is for certain, and I'm actually kinda surprised they got away with as much, considering that this series is typically aimed at a younger audience, but I'm not complaining!

So overall, this one's hard for me to rate. On the one hand, this is a movie that ignores the established rules and canon and kinda just does its own thing, based purely on inspiration after seeing select out-of-context scenes and images from the series. So in that sense, it's frustrating as hell to watch as a fan, and I found myself yelling at the screen on numerous occasions. However, as mentioned, taking all of these elements and removing them from the series, looking at this movie purely as a stand-alone, it's actually pretty damn solid all around. So take that however you will, I guess, but if you can somehow manage to ignore all of this movie's inconsistencies or, better yet, you're not a fan of the series already, you'll be in for a bloody good time with this thing. Otherwise, you're probably better off watching something else.