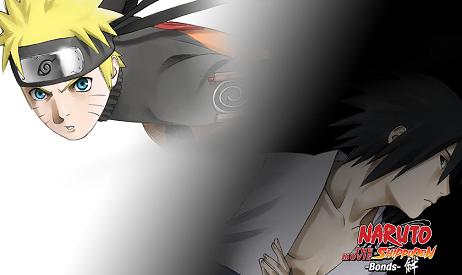 Up next is the big cinematic reunion between Naruto and Sasuke. That was pretty much the entire selling point of Bonds, and though Sasuke's actually absent for most of the movie up until the end, the rest of this one actually holds up pretty well enough on its own nonetheless.

Konoha has been attacked by ninjas from the Land of Sky, and by this point, I'm seriously wondering why everyone doesn't just up and leave the village to go live somewhere else that doesn't come under attack so often. But anyways, after the attack, Shikamaru leads a four man squad including Kakashi, Shino, and Sai to track down the ninjas and form a counterattack, while Naruto, Sakura, and Hinata escort a helpful doctor and his young apprentice to provide aid back in their own nearby village. But things soon take a turn for the worse, and it's up to Naruto with the unlikely aid of Sasuke to save the day once more.

In many respects, this movie plays out much more like a Dragon Ball movie than a Naruto one, with the main villain's appearance and powers more resembling a character from that universe as well. And once the big final battle begins at about the halfway point, the remainder of the film rarely cuts away from it, as our characters go through various powerups and transformations over the course of the fight. And the first time I saw this movie, this aspect really turned me off. However, the more times I revisit this movie, the more I actually come to appreciate it as one of the stronger entries in the series.

Like many of these movies, this one also can get pretty cheesy at times with some of Naruto's preachiness. Yet, unlike the others, this one appears to be aware of its cheese, and even includes a line from Naruto where he gives forewarning that what he's about to say may come off as pretty cheesy. So it's hard to fault this particular one for that, but yeah, some of the lines here are a little cringe-inducing as they really try and drive home the themes concerning the bonds between a master and apprentice.

I also noticed that they really tended to pretty Naruto up quite a bit on a number of occasions, giving him somewhat feminine facial features at times, particularly around the eyes. That, in addition to the more female centric cast in comparison to the other movies, does make me vaguely curious if the writers didn't have a different type of bond in mind as well for this film. Surely they weren't trying to doll Naruto up for his big reunion with his long lost lover, Sasuke, were they? (lol)

Like the second movie, this one recycles the idea of portraying the main villain as a kind and gentle soul at first, though to be fair, the twist reveal is actually a little more surprising this time around. And in addition to that, there are many other ideas that would be recycled in later movies, such as half the film being one big continuous fight, or certain characters' genders being pointlessly in question for a portion of the movie. But hey, this lack of originality has long come to be expected from the guys who write Naruto filler, and these aspects don't necessarily detract from this particular movie itself.

But while that might be a bad habit for the filler writers, something they're actually pretty good at is showcasing some of the side characters that have a tendency to be neglected in the main series. In this instance, as mentioned, they include a side plot including several side characters, in which Sai and especially Shino really get a chance to shine. In contrast to the previous movie I reviewed, here its clear that the writers for this particular film actually do have a clear grasp on these characters, and actually treat many of them with even more respect than the original author himself. So that's something that this movie definitely gets right, and even though Sasuke's not in this thing a whole lot, I still felt like his inclusion was handled respectably enough, and I actually liked that they kept his reunion with Naruto relatively brief.

So all in all, this is an interesting movie. I hated it the first time I watched it, yet, every time since, I've grown to like it more and more, to the point that it's probably one of my favorites in the series. It's cheesy, but it doesn't shy away from that fact, and even so, it's not nearly as unbearable as some of the other movies can get. The characters are handled well, and the animation is really nice and fluid, though the actual art is a bit of a miss at times. But this thing ends on a really calm yet powerful note that still manages to get to me, and brings this movie to a nice closure. I'm not sure if I could safely say that I'd recommend this one to non-fans, but for fans of the series, this movie is a must watch. And if you don't like it the first time around, see if a second watch won't sway your views.