Road to Ninja: Naruto the Movie 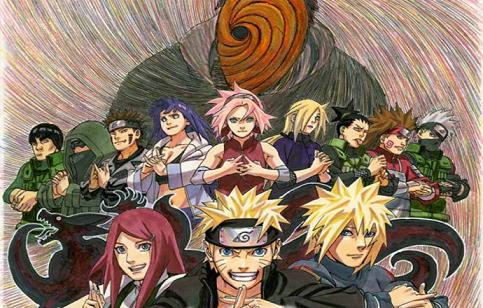 The other movie I caught the other night was the latest in the Naruto series, Road to Ninja. I came into this one already pissed off after having sat through the frustrating Blood Prison, and I was worried that this movie was only going to continue to fuel my rage for the evening. However, once the story really starts to kick in, this movie actually takes a nice little turn and proves to be genuinely charming, and one of the strongest entries in the movie series to date.

The story with this one is that Tobi has created a Limited Tsukuyomi, basically a smaller scale version of his Moon's Eye Plan that transports Naruto and Sakura to what's essentially a reflection of our own world. However, like looking at the reflection of the moon against a lake, there are ripples in this new world, and as such, several of the characters act in entirely different ways from how we've come to know them in the real world.

Unlike all the other movies, this one doesn't take our heroes to some filler land or invent new filler characters exclusively for the movie (aside from Sakura's parents, who technically exist, but we've never actually seen them in the manga. And if we ever do, I sure hope that Kishi doesn't stick with the god awful character designs the anime came up with for them. I mean, good god...). Instead, it chooses to explore the changes made to this new world, and let us rediscover these characters in a whole new light.

For instance, gone is the kind, shy, and frail Hinata. Here, she's open and in your face, unafraid to speak her mind, and quite frankly, she's a bit of a bitch. And this world's version of Sasuke has embraced the fact that he's got women tossing themselves at him left and right, and is quite the ladies man as a result. But in other cases, we merely see characters essentially trading characteristics with one another, such as Choji and Shikamaru, or Kakashi and Guy. It's actually pretty neat to see all the differences in this new world, and it makes for some humorous moments seeing characters act entirely differently from normal. However, there are a few cases where the changes do feel a bit forced, such as Kiba being a huge cat person, or Shino spraying bug spray everywhere (though his random as hell "I hate bugs" line was awesome!).

But the biggest changes come in the form of Sakura and Naruto. This world is said to be an illusion that provides you with whatever it is you wish. And so, in this world, Sakura no longer has her nagging parents around, as they were the ones to have died saving the village during the Kyuubi attack. And meanwhile, Naruto's parents are still alive and well, though they're not quite the brave, noble shinobi that he's come to admire. But it's really interesting to see Naruto and Sakura come to terms in their own different ways with the changes brought onto their lives in this new world, only to realize that, now that they have what they've always wanted, they miss what they already had in the real world. So it's kind of a grass is always greener on the other side type of story.

The movie also revisits the Kyuubi attack quite a bit, and in fact, this movie is probably the most cemented in canon of any of the movies to date. Which makes sense, seeing as Kishimoto actually played a big role in contributing this time around. But that's not to say that this one's perfect. Early on, Sakura was quick to get on my nerves, essentially reverting back to her more annoying part 1 self as she complained to Naruto about her parents, and even mentioned how Sasuke would understand, which is bullshit, since one of the very first chapters in the series saw Sasuke talking mad shit to Sakura for complaining about her parents. But the movies usually tend to do this part 1 reverting nonsense with Naruto, so it was interesting to see a different character fall victim to it instead this time around. Perhaps we could look at this as another case of switching characters up, though I really doubt this particular instance was intentional. And there are some other minor inconsistencies, but it's probably easier to just try and not think too much about them.

So I actually liked this one quite a bit. And it ends with quite a few really nice and satisfying twists involving the Akatsuki and the main villain. The animation was solid all around, and the story was actually really well done, even if there were a few hiccups here or there. But it's nothing that'll frustrate fans like what we got from Blood Prison at least, and everything comes together in a nice, touching package. If you're a fan, definitely check this out if you get a chance.