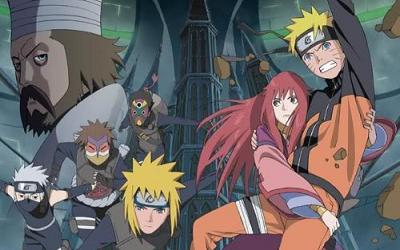 And now we're finally on the last Naruto movie I have to review, The Lost Tower. Upon my initial viewing a couple years ago, I not only hated this thing, but I thought it was hands down the worst Naruto movie to date. However, my most recent viewing wasn't nearly as hostile, though while I still wouldn't call this movie good, it's mainly just sorta mundane.

This one's a time travel story, where Naruto gets transported back in time and happens to meet his father, Minato. See, where the selling point of Bonds was the reunion between Naruto and Sasuke, the sole selling point of this movie was the inclusion of Minato, but that's not the only thing this movie shares in common with Bonds. The structure is also similar, with half of this thing acting out as one long, ever evolving battle against the main villain, a puppet master who keeps transforming into bigger and stronger robot-like puppet bodies. Unlike the Dragon Ball feel of Bonds, though, this fight feels more like watching someone playing against the final boss of a video game or something, and even has the characters uncovering the enemy's weak spot for massive damage and all that.

Other than the big boss fight, Naruto joins the mission to protect the queen and save the people of the ruined nation and whatnot, and we also see the bond forming between father and son, as the two gradually come to realize just who one another is to each other. And, yeah, there's really nothing all that spectacular here. The action's pretty standard stuff, what little story that's here is very basic, and it all ends with everyone's minds being wiped anyways, so in the end, this is a pretty pointless movie. And equally as pointless was the inclusion of a younger Kakashi, who really doesn't contribute a damn thing outside of merely existing. And that's kinda the problem with this movie as a whole, it's not terrible, it's just another movie that happens to exist is all.

But like I said, I didn't hate it this time around, though it's still not all that great. And the lack of quality really was my major gripe with it the first time around, since the production of this movie was the reason the anime team neglected the actual anime so badly at the time, thus resulting in the complete and total butchering of the Pain arc in the anime, which really is still an unforgivable crime. But in any event, what's done is done, and really, there's not much else to say about this movie.

So there you have it then. And since I have now revisited all of the Naruto movies, I suppose I could go ahead and rank them now. So, in order from best to worst, I think they'd probably go something like this: