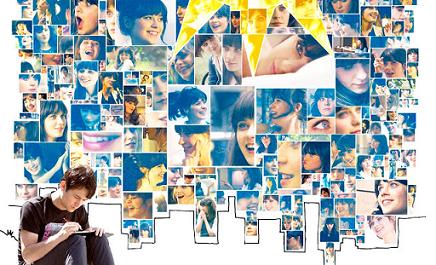 2013 has been a shitty year for movies. Now, there was a part of me that was wondering if I was just becoming more and more cynical of films, or if the new movies releasing as of late really were just that bad. But after watching and being completely blown away by (500) Days of Summer for the first time this past weekend, I can safely assure you that it's not me. Movies these days have just truly been mediocre almost all around, and it took me going back and stumbling upon a tremendous little gem like this for me to see that.

I honestly don't know why it took me so long to get around to this movie. I've heard good things about it over the years, but my god, this beautiful, touching film is an absolute work of art. This movie had its way with my emotions like nothing else. One moment might wrench right at my heart, only for something to happen seemingly out of nowhere that'd leave me in hysterics. In some ways I suppose you could call this movie a romantic comedy, though I honestly don't believe that that description even begins to do this movie even the slightest bit of justice. It's both a drama and a comedy, so well balanced and perfectly pieced together to tell a tale of the despairs of love that is equal parts adorable and depressing. This movie is just so full of genuine heart and soul, and rings so true on so many levels.

Starring Joseph Gordon-Levitt in what I now believe to be his best performance to date, we join him as he meets the love his life, a girl named Summer, played by Zooey Deschanel, and we experience first hand the ups and downs of their complex relationship. The two have tremendous chemistry together, and watching their relationship gradually manifest is an absolute joy to behold. I'm not exaggerating in the least when I say that these two are just adorable together. And seeing JGL dancing down the street as a musical seemingly comes to life in his head was a thing of sheer beauty, and the immediate contrast as we jump ahead into his depressive state once their relationship goes sour is just the kind of touch that this movie nails down so perfectly.

The writing and editing is top notch, and in addition to our stars, the supporting cast also does a wonderful job bringing this movie to life. It was pretty cool to watch this and see people like Clark Gregg and Chloe Moretz pop up. But really, I just can't stress enough just how good JGL is in this thing. This is a man madly, obsessively in love, and he absolutely sells the hell out of this role, and believe me, he couldn't possibly have given a more honest and true to life performance if he wanted to. I don't know how he got overlooked for an Oscar nod for this performance, and, looking back, this whole movie pretty much got a big ol' snub, which is really kinda baffling, considering some of the movies that somehow snuck away with nominations the year this came out.

But I fell absolutely in love with this thing. From start to finish, this movie was truly something remarkable. Director Marc Webb spun us quite the web of love and heartache, and brought to us a story that'll stir your emotions to their very core. And it also served to remind me that I can still become truly invested in a movie, during a year where each new mundane release has been leaving me more and more concerned that I was just becoming a cynical ass. But if you haven't seen this one yet, well, here's one more person asking you to please do yourself a favor and witness the magic that is (500) Days of Summer for yourself. It's just so good!