Guardians of the Crescent Moon Kingdom 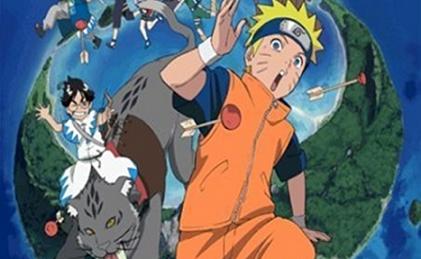 The last of the part 1 movies was released right in the thick of filler hell, and you can definitely tell. If Legend of the Stone of Gelel was a decent filler, then Guardians of the Crescent Moon Kingdom is barely passable, if even that, and is one of the weakest entries in the movie series.

This one sees Lee joining Naruto, Sakura, and Kakashi on their mission, as they escort a naive prince and his spoiled brat of a son back to their home in the Land of the Moon. But once they arrive, they see that the kingdom has been overthrown, and now it's up to Naruto and the gang to reclaim the throne in the name of Fat Elvis. More so than any of the other movies, this one feels like it was made with younger children in mind. The tone of the movie is just very childish at times, and is filled with overly dramatic and awkward to sit through moments. And the spoiled kid gets converted much earlier than usual as well, at the end of the first act, and that's right around the time that the cringe-inducing moments begin to spring up left and right, as everyone is just way too overly enthusiastic over this whole "friends forever and ever" deal.

But in complete contrast to the mostly childish tone, this movie also packs quite a punch when it comes to the action. In fact, it's actually surprising just how exciting and awesome all of the fight scenes are. And it's a bit of a shame, too, because these fights definitely deserve a better and more fitting movie. But as it is, the action is pretty much the sole thing that makes this movie even worth watching.

The villains and character designs in general are actually not bad, though they decided to switch things up a bit for our main cast. Naruto and friends are all sporting new "summer attire", which I suppose is sorta neat for a bit of a change, though it does beg the question as to why they don't just wear this sort of get-up more often. You'd think that everyone would be getting pretty hot moving all around wearing those jackets like they do all the time, and I'm pretty sure the weather's not exactly cool year round in this world, but I digress.

So yeah, this one's a bit of a bust. While the action scenes are pretty cool, I wouldn't go so far as to say that they entirely make up for the rest of the film, which can be pretty hard to sit through at times. The decision to treat the audience like children and go this immature rout so late in the game, just when things are about to take a much more darker and mature tonal shift, is kind of a stumper, until you remember that this was released when the anime was pretty much at its worst quality state. So as a whole, this is one of the weaker movies in the series, and is very skippable.