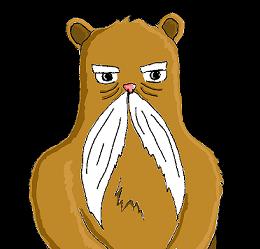 Huck is the Elder Ham, the leader of the hamster village. He's is a kind old hamster, and he has witnessed many things in his long life, including many of which his own elders would have preferred that he hadn't. And as such, he maintains a certain stubbornness for the "old ways". Though as their situation continues to worsen, he, too, must learn to adapt and let go of old habits.

When their village was attacked by the Devil Corps, he helped as many hamsters as he could in escaping the devastation. And now, hunkered down with his rag tag team of hamsters, he has played a crucial part in organizing a retaliation against the Devil Corps, starting by tracking down the Ninja Kat to aid them in this secret war.