Ninja Clash in the Land of Snow 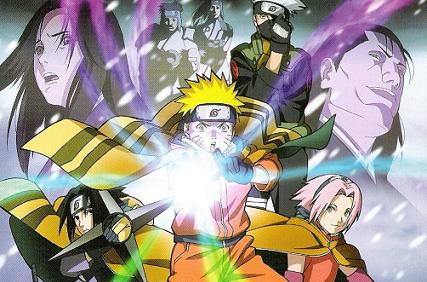 So after watching the two latest Naruto movies last week, I've decided to go back and start from the beginning with the very first Naruto movie. And while this series of movies can be a bit hit or miss, it couldn't have started out on a stronger note, as Ninja Clash in the Land of Snow is a fine animated feature in every regard.

Since this was Naruto's big movie debut, the writers apparently decided to include a movie aspect to the story, as we see our heroes escorting an actress on the set of a movie as they journey to the Land of Snow to film their climactic scene. However, there's more to this actress than she's letting on, as once they arrive, it's not too long before she finds herself under attack in the villains' attempts to capture her and retrieve the treasure of her royal heritage.

This is a solid movie from start to finish, and adds the perfect balance of action, drama, and comedy. That last one's a big one, too, since the writers usually tend to overdo it with making Naruto more obnoxious than he should be, but that thankfully wasn't the case this first go-around. But this one just has a really top notch quality feel to it. In fact, in many respects, this almost feels like the Naruto version of a Cowboy Bebop episode. The dark, shadowy colors and quieter dialogue moments have a very Bebop vibe to them, and even the original character designs have a bit of a Bebop look. The music might not be nearly as inspired, but the visuals and tone of the movie definitely have that high quality touch to them all around that really elevates the material.

And taking place before the Sasuke Retrieval arc, this is also the only movie to really feature Sasuke for any significant time until movie 5. But even so, neither he nor the rest of Team 7 play a huge role here. No, this one's about Naruto and the Princess, and his constant drive to motivate her not to give up on her dreams. Heh, typical Naruto, but that's part of what makes the main series so great, and this movie truly did a great job in capturing the spirit of the series.

A lot of heart and hard work went into this one, and as such, this is honestly probably the only movie in the series that really feels like a legitimate film, as opposed to merely an extended filler episode. But this one really is great, even beyond being a Naruto movie, and is almost certainly the very best movie of the lot. I'd recommend this one even to non-fans of the series, or anyone who can appreciate anime or animated movies in general. Good stuff!