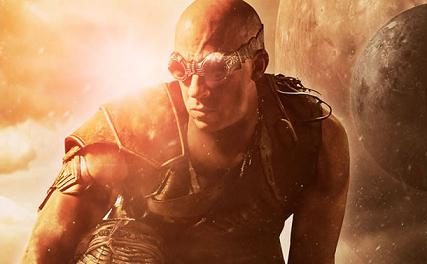 The latest Riddick movie had all the potential to quite possibly be the best one yet, if it weren't for the fact that it's bookended by the most bullshit cop-out beginning and ending they could've come up with. And it's such a shame, because everything in-between is Riddick-ulously good. (Sorry.)

Where Pitch Black is a sci-fi horror monster movie, and then The Chronicles of Riddick expanded things by becoming an action adventure space opera, this one scales things back down again quite a bit, though if I were to place it in any genre, this one would probably just be a straight up action flick. However, this one's broken up into three different sections, each of which has a very different feel from one another.

The movie starts off with Riddick basically just exploring this new planet he's found himself on. Alongside his dog companion, Riddick sets out to make a fresh start and find himself all over again, all the while discovering what dark secrets lie upon this planet. Playing out with very little dialogue, this section probably couldn't be farther from what we've typically come to expect from a Riddick film, and yet it's also by far the strongest section of this movie. Hell, the whole film coulda been 90 minutes of Riddick just interacting and adapting with his environment and fighting off the occasional creature that's out to get him, and I woulda been fine with that.

However, after discovering that his peaceful times in the sun are about to run out, Riddick lures out the bounty hunters in an attempt to steal a ship and escape the planet. And once the bounty hunters arrive, the movie shifts almost entirely away from Riddick's point of view, focusing solely on said bounty hunters in their mission to find and retrieve Riddick and collect on the infamous bounty on his head. At first, I was a bit wary about this sudden shift in focus, and yet this portion, too, actually plays out fairly decently itself as well. In fact, if any part of this movie shares the horror aspect of Pitch Black, it would be here, with Riddick playing the part of the monster hiding in the shadows, ghosting his victims one by one.

The last part of the movie is what we've all seen in all the trailers, that being the big monster mash finale. However, unlike Pitch Black, they completely scrap any sort of horror element upon their arrival and instead go into full throttle action mode once these beasties show up. And it all plays out fairly decently enough, with some exciting moments and some good twists along the way. But sadly, the writers of this thing apparently wrote themselves into a bit of a corner at the end, and ended things on a completely bullshit, out of nowhere moment that pretty much flatlines this thing almost immediately.

And as I mentioned, the ending wasn't the only cop-out here, as the movie starts off by pulling a Resident Evil: Afterlife and essentially retconning the ending to the previous movie. Through a brief flashback, we see how Riddick lost his position of power within the Necromonger society that he so suddenly gained at the end of Chronicles, and then... that's it. That's all that's mentioned of it. And it's really annoying and disappointing, and makes me wonder why some movies want to leave things open with so much possibility to explore new and different aspects, only to throw away all that potential and just start with a clean slate in the next installment, like none of that even happened. So in that regard, I guess that writing themselves into a corner has become a bit of a recurring element now within the Riddick series. But hell, if they were going to go this rout, I almost wish that they woulda just left out the flashback entirely, since the few scenes involving the Necromongers clearly don't fit the mold of the rest of this thing, and really stand out with their drastic clash in style.

I know that The Chronicles of Riddick wasn't nearly as widely well regarded as Pitch Black, but I actually liked it even more than the first movie. But in many ways this movie feels like a response to the negative reaction that Chronicles garnered, and while the movie's mostly solid overall, I still can't help but feel let down by the awesome potential there was here to really continue to expand where Chronicles left off. But yeah, this one definitely shares more in common with the first movie, both in scale and tone. And also like the first movie, this installment returns to an R rating, and boy do they go out of their way to show that off. There's pointless nudity on top of blatantly glorified gore, almost like they were trying a little too hard to make up for the fact that Chronicles was PG-13, but really, it just stood out and left me rolling my eyes. This wasn't that big a deal, though, and it's really a minor issue compared to the much bigger problems this movie faces.

As much as I enjoyed Chronicles, I will admit that the theatrical version wasn't without its issues as well. However, the Director's Cut version addressed and fixed literally every single problem I had with that movie, and so there's a part of me that wonders if such a cut might not be released down the line that does the same to this latest Riddick. But as is, there's a really good, solid movie in here, with decent action and an awesome slow build of mood and setting, but those damn cop-outs are what ultimately hold this thing back from being the truly great movie it has all the potential to be.