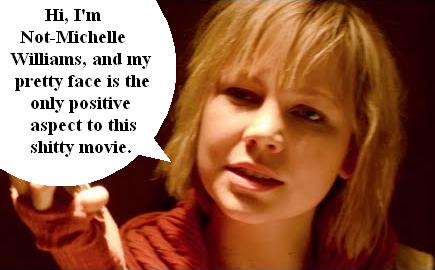 With both Ned Stark and Jon Snow present in this movie, one would almost think that winter was coming to Silent Hill. And if the coming of winter is supposed to spell doom for the world, then it can't come soon enough. Silent Hill: Revelation just flat out sucked.

The original Silent Hill movie came out in 2006, so with six years between films, you'd think that that would be enough time to work up something at least halfway decent. You would apparently be wrong, as it would turn out. While the first movie wasn't great, it at least maintained a genuinely creepy vibe throughout, had some legitimately interesting visuals, and the story was even somewhat interesting. None of those descriptions can be applied to this piece of crap.

This movie is just an unimaginative farce. It tries so hard to be creepy, but it just goes too over-the-top with the "weird" factor. It feels forced, and instead of creepy, it just comes across as goofy and, quite frankly, boring. It often forgets that it's attempting to be a horror movie, and tries (and also fails) to steal a page out of Resident Evil's book by incorporating action elements to compensate. But, as with everything else in this movie, the action just feels forced, coming at you out of nowhere and sticking out like a sore thumb. Not to mention that the CGI effects are like something straight out of a bad Sci-Fi Original Movie. Actually, on second thought, scratch that, because that's far too complimentary of a comparison for this ugly monstrosity.

The real killer of the movie, however, is the writing. Holy crap this dialogue. Exposition, exposition, every sentence is exposition. Whatever happened to "show, don't tell"? The actors in this movie are constantly telling us exactly what they're doing as they're doing it. Constantly explaining every single thing, and then re-explaining it every five god damn minutes. The dialogue is just so awkward and forced, as if the script never even made it past a first draft.

And the acting, my god. This movie has good actors! So why are they so terrible in this film?! I can only blame director Michael J. Bassett (who, no shit, just so happened to also write this steaming turd) for this atrocity. The acting wasn't exactly praise-worthy in the original, but here it's almost borderline parody. And the stiff delivery along with the terrible, terrible writing makes for a constantly cringe-inducing watch.

The plot (and I use that word very loosely) was idiotic all the way through, so I suppose that, with that in mind, it may as well be fitting that a freaking hugging contest ultimately determined the final outcome. No, I'm not even joking, the big finale was a battle of who could hug the hardest. Hell, I'm gonna need a hug after sitting through this disaster of a movie.

And Sean Bean didn't even die! Sean Bean always dies! (Sure, he didn't die in the first one either, but still!) This movie got nothing right! It couldn't even get that right! Really, I have nothing positive to say about this movie. It wasn't even so bad it's good, it was just bad. Bad bad bad bad bad. But I don't need to tell you how bad this movie was, I'm sure one of the characters will be more than willing to fucking explain it to you over and over again!