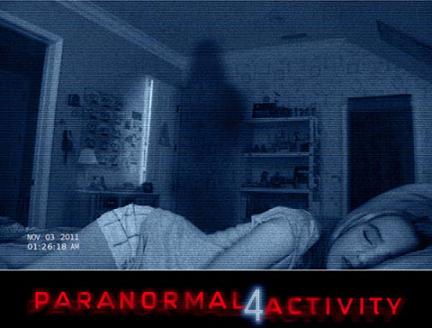 Paranormal Activity 4 is actually the first entry in the series that I've seen thus far. And if the other three are nearly as funny as this one is, then I'm more than willing to go back and give them a shot as well! That's right, from start to finish, this movie is utterly and unintentionally hilarious. All of the "scares" left my theater laughing at the sheer cheesiness, and I at least had a good enough time that this movie's countless number of problems couldn't take away from my enjoyment.

Spoilers ahead, in case anyone honestly cares.

So after a creepy little boy's mother is taken to the hospital, the family who lives across the street takes him in as one of their own. Why this child is just randomly brought in, as opposed to being taken by child services, is beyond me, but let's just go with it! Anyways, after the kid moves in, more and more creepy things start happening at the house, and that's when the fun really begins.

The main girl starts noticing the creepiness, and so she brings aboard her appropriately creepy boyfriend (seriously, it's revealed that he's essentially been watching this girl sleeping via her web-cam, and yet even after this is revealed to her, she's still completely cool with the dude. What?!) to help set up cameras throughout the house to monitor the activity. The thing is, after they spend all this time establishing that they're setting all of this up with the intention to go back and watch the tapes, they never actually do that. The footage goes completely ignored, and for no apparent reason, rendering this major plot point entirely pointless.

Also concerning cameras, I understand the need for them in order to get the whole "found footage" aspect down, though there were several occasions where it just felt awkward. Like, when the girl is just shoving a camera in her mother's face while she's preparing a meal. It's as if everyone is completely cool with constantly being filmed, no matter how inappropriate the setting may be for it. But then, when shit starts to happen, despite it all being captured on film, the family wants to argue that the girl is crazy and just making things up, when they could just as easy watch the damn footage she's been filming and see that she's not lying. Hell, even after creepy crap starts happening to the other members of the family, they still don't wanna give the girl the benefit of the doubt. (Also, random, but I love how there was just a random cat in the movie that would run across the screen at times, who nobody in the family ever once acknowledges, almost as if someone on set just happened to bring their cat to work one day and let him have free reign.)

But going back to the camera, other than inappropriate family moments, there were also times when it was like, seriously, why are you still even holding this thing? Drop the camera and save yourself already! (Though there is one single scene where she actually does just this, as she attempts to break out of a garage.) And again, it's one of those things that's hard to pick on, because I understand the need to get it on film for the sake of making the movie, but still, it really kills any kind of believability factor.

I will say this though, the movie doesn't try to go the cheap rout and throw in jump scares around every corner (though, to be fair, this movie doesn't actually throw in any scares now that I think about it). And it even plays with your expectations of the trope. For instance, there are several times when a character will open the refrigerator, leaving the door blocking out the rest of the scenery. In most horror movies, you'd expect that once the door's shut, something or someone would suddenly appear there to provide a quick startle. However, to this film's credit, they never actually go through with that, which I honestly have to give them kudos on that.

As ridiculous as this movie is, the ending just left me dying with how out of nowhere it was. For one thing, the big finale is a total rip-off of The Blair Witch Project's conclusion, minus any sort of subtlety. And then the final shots turn this ghost movie into some sort of random as hell zombie apocalypse or some crap. Seriously, I don't even know, and the movie did absolutely nothing to suggest that this would be the final direction it was heading towards.

So yeah, technically speaking, this was a terrible movie. And yet, despite it's many, many flaws, I really can't find myself hating on it too much. Because in the end, it was still very enjoyable, even if for all the wrong reasons. Considering that it's supposed to be a serious horror movie, this is a complete and utter failure in that respect. But otherwise, Paranormal Activity 4 is probably the most unintentionally hilarious movie I've seen this year.