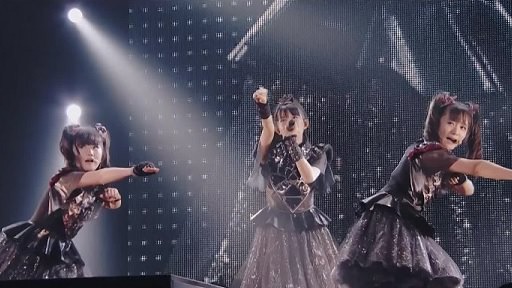 Now granted, the audience specifications made a pretty big difference during the two Mass shows, but sadly, that same can't really be said for these shows, outside of perhaps the all female Red Fox Festival. The one I was most curious to see how it would look and sound was the Silver Fox Festival, but it turned out that they merely had a special seating area reserved for those age ranges, and the rest of the audience in the mosh'sh pit consisted of their usual crowd, which really confused the hell out of me when this show first started.

But whether it was that they dropped the volume on the audience, or you just couldn't hear them as well due to the venues they were performing in, that ferocious intensity we got out of the audiences for The Black Mass and The Red Mass was missing in these shows. That's not to say that these weren't still good shows mind you, just that the fan restrictions didn't quite play as noticeable a role in the overall shows this time around.

But anyways, as to the shows themselves, I'm just going to share my thoughts on what stood out to me in general for all five, rather than covering them each individually from start to finish. They all started with Babymetal Death, and I dug how they brought the curtain drop back for these shows, which I don't believe they've used in a couple of years by this point (at least not at any of their shows that I've seen from this time period that is).

On each show during Megitsune, they would take a breather to welcome the audience to that night's festival. Sometimes this came closer to the start of the show, but then on the Black, Red, and White shows, they didn't officially welcome the audience until halfway into the show when this song kicked in, which I got a bit of a kick out of.

Then we get to Gimme Chocolate, and while it's usually either Yui or Moa I catch mouthing along with someone else's lyrics when it isn't their turn to sing, for these Fox Festival shows, it was actually Su who I caught doing it this time, as she was mouthing along with Yui and Moa during their parts of this song on all five nights. I'm not sure if she's done this before and I just haven't noticed, but usually she tends to just smile and nod along during their parts, so it was really funny to see her break out of her usual mannerisms and sing along with those two. (And speaking of singing along, I caught Hideki singing along to Headbanger later on in the night of Black Fox Festival, too!)

On the nights in which they performed Awadama Fever, the Kami Band did their solos as a lead-in to that song, similar to how they normally do for Catch Me If You Can, which was really cool. I remember the first time I saw them do this before Awadama Fever, it really threw me off when that song kicked in instead of Catch Me If You Can (and I'd be lying if I said it didn't still throw me off on Red Fox Festival as well, even though I knew Awadama Fever was going to kick in once the Kami solos were done!) And on the Silver Fox Festival, I even noticed during their solos that Mikio and Ohmura had matching guitars! Sweet!

So I was curious if they were gonna finish us off with No Rain, No Rainbow and Onedari Daisakusen, the only two solos they had yet to perform on these shows. But nope. Instead, we got a repeat of Amore from Su, and GJ from Yui and Moa. Granted, I sorta didn't actually expect to see No Rain, No Rainbow, as that's a pretty rare song to see them play live, but Onedari Daisakusen used to be a staple of the band's, so that one is a bit more surprising to see completely left off.

It was cool to see them close off Black Fox Festival with the duo of Headbanger and Ijime, Dame, Zettai, which helped give that night a bit of an old school feel. And I notice how they chose to close with this song on the men's show last time around during The Black Mass as well. I guess they feel it's a particularly masculine song? Heck, I ain't complaining!

And now I just have to mention Hideki's drum solo for Catch Me If You Can on the Gold Fox Festival. About halfway into his solo, Hideki suddenly stops, stands up, and he just looks out to the crowd and shrugs his shoulders, before sitting back down and resuming. Now, this wasn't quite the sick effect as the drum pause during the solo for this song back at O2 Academy Brixton, but rather, this was a much more comical moment this time around, and I seriously died laughing! And you could tell that the Kamis were all just generally having a lot of fun during this song on this night, too. It's always great to see the Kamis really getting into the music like this.

I got thrown off about halfway into Gold Fox Festival when Headbanger suddenly kicked in. I had to check and see if the show was almost over already, as that song usually comes on much later, but nope, we were only at the halfway point. And this would happen to me again during Silver Fox Festival when Road of Resistance started up only halfway into the show as well, which I'm used to seeing played as either an opener or a closer, as opposed to a midway song. So a couple of curious placements there.

But then for the last show, White Fox Festival, I perked up in my seat at the opening note of Syncopation. I knew this song was going to be on the Big Fox Festival, but it's another pretty uncommon song of theirs, so I honestly didn't expect to see it on one of these smaller shows. So that was a surprise to be sure, but a welcome one!

Like Budokan, I had already seen this show before I had started reviewing all of these shows. But also like Budokan, it was due for a rewatch now with the context of all of the band's history in mind. And this show is notable now due to the fact that it marks the last appearance of Yuimetal performing with the band. The first time I watched this show, she hadn't yet officially announced her departure, so there was still hope that she may return. Yet a year after this show took place, that announcement was finally made, and she was no longer a part of the band, giving this night a new historical significance that definitely changed the context during this viewing.

But onto the show now, where we saw the Kamis performing solos in front of Awadama Fever during The Five Fox Festival, here they do their solo thing ahead of Yava, which even has a bit of a tropical flair to its sound. Really cool to see them experimenting with more ways to utilize the Kami Band and give them more opportunities to just jam out with the spotlight on them. The girls then rise up from beneath the stage, all smiles, and as they performed the song, the big screens behind them would display these really cool lightning effects on top of their live footage, making for an electrifying performance.

We move along to GJ, and it just hit me watching this performance that this was the last time we would see Black Babymetal. It just feels weird thinking about that now, and this song would go on to become a Moametal solo after this night. And now I'm suddenly really starting to feel Yui's departure.

I mentioned this song above, but as soon as that first guitar note hit for Syncopation, the crowd went wild, and understandably so. I'm never not gonna gush over just how sick a song this is, and their performance on this night was just so utterly bad ass, and reeling with intensity.

This was then followed up by yet another one of my all time favorite performances from the band with Meta Taro. And in fact, it's their performance on this night that's the reason I'm left gasping with excitement anytime I hear this song start up on any of their shows now.

I keep mentioning in my other reviews how this song feels larger than life and atmospheric whenever they perform it live, and that feeling is never more the case than on this show. Particularly when we get to the call-and-response, and then the music cuts out for a moment as the fans all sing the song back up the band on the stage, the song just sounds like the sort of epic track that you'd hear in a blockbuster Pirates film or something, and I feel almost as if I'm transported onto the sea itself watching this performance. This is definitely their best performance of this song, and really, as grand and sweeping as they make this song feel, I'd say it's up there among the band's best all around performances period at that.

The cool effects work on the big screens came into play again during Karate, in which the girls were made to look as if a fiery aura was glowing around them. And it was nice to see Yui and Moa bust out their handy smoke guns one more time during Headbanger. It feels like it's been a while since we've seen those, too.

Then we get to this show's closer, The One, and now's when it really starts hitting me hard again, as I watch and realize that this is it, this is Yui's last performance with the band. But she couldn't have left on a more fitting note. Because just as we all are, no matter where she may be or what she may be doing now, she too will always remain a part of The One, as the show ends on the image of the three girls raising their kitsunes in the air towards one another before the lights cut out.

So all in all, yeah, this was another really damn great show with some really fine performances throughout, even if I almost feel like this review winded up being a bit of a downer in places. But I suppose that's hard to avoid now, all things considered. It's still hard to believe that this was it for Yui, and that I've finally reached the end of the line for her performances with the band. A part of me still expects to move on to the next show and see her show up again like normal. But nope, I know that's not going to happen, as the next big show after this was performed with Su and Moa alone. But we'll discuss that more in-depth in my next review, as we move on to Su-metal's hometown of Hiroshima and celebrate her 20th at Legend S. See you!