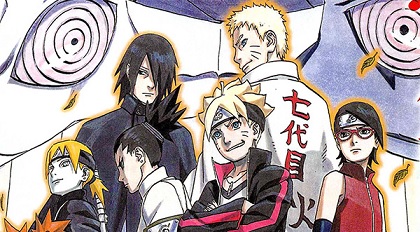 I mentioned in my review for The Last how I hoped that Boruto would similarly come Stateside sooner than usual. Well, it turns out that Fathom Events held a limited number of screenings, similar to what they did with the new Dragon Ball Z movie earlier this year, and so I was able to watch this brand new release in the same year it came out in Japan. The closest showing to me happened to be a three hour drive away, but I figured, hell, coming off of The Last, which more than impressed, and given that this one promised to be even better, I was more than willing to make a trip out of the occasion. And boy was it worth it. Boruto more than lives up to that promise, and is probably the closest we'll get to having a perfect Naruto movie.

Taking place after the series epilogue, we follow Naruto's son, Boruto, as he deals with life as the Hokage's son. Naruto's so busy with his duties that he's constantly having to send off shadow clones to take care of things outside of the office, including television appearances, and at times even life at home. But this doesn't sit well with Boruto, who wants nothing more than for his father to really be a part of his life.

This whole aspect was handled incredibly well, and features so many layers, it's kind of mind boggling to see in one of these kinds of movies. You get so used to being treated to typical, well, filler-level crap from a lot of these movie spinoffs based off of popular anime series. But, seeing as the creator himself penned the script this time around, it really shows just how much a difference that can make in terms of applying actual quality, because this is some seriously deep stuff that's handled so effortlessly.

We see the frustration of Boruto's inner turmoil, both striving to gain the attention of his father, yet so mad at him that he's rearing on the boiling point of full blown retaliation. And even on Naruto's end, he acknowledges how he's been messing up as a parent, how he needs to do better, and there's almost a timidness at times as he's not really sure how to approach his son anymore, for fear of further pushing him away. These are really deep seated family issues that are handled in such a moving and respectable manner, and it's just damn impressive to see this all integrated so seamlessly in what feels like a story straight out of Part 1 of the Naruto manga.

In fact, the story as a whole almost feels like a full blown arc condensed down to a two hour movie, but done in a way that doesn't feel rushed or choppy. The pacing is spot on throughout, and they know just how long to stick with a scene before moving along with the plot. Honestly, this movie really shows precisely not only how to do Naruto on a cinematic level, but quite frankly, any big sprawling anime series looking to have a cinematic spinoff could learn from this movie in terms of how to make the transition work so smoothly.

Where as a lot of actions will be over-explained in either the manga or anime, this movie trusts the fans to be able to just flow right along with the action on screen. For example, all throughout, there are scenes in which, had this been in the manga or anime, you know we would be getting in Naruto's head and hearing his thoughts, explaining the direness of the situation, or perhaps Sasuke trying to assess their circumstances. But here, the movie merely shows us these characters' facial reactions, which tells us everything we need to know through using the old "show, don't tell" concept. And, what d'ya know, it works, and it works damn well.

Also part of what makes this movie work so well is that they don't feel the need to shoehorn in a ton of characters. We mostly follow Boruto, as well as his team consisting of Sarada, Mitsuki, and their sensei Konohamaru, and other than them, we also follow along with Naruto and a returning Sasuke. And, outside of some brief interactions with the likes of Shikamaru or Hinata here and there, that's mostly it. Kishimoto wasn't concerned with providing a lot of fan service (though that's not to say there aren't some decent cameos), he stays very focused and placed priority on story and character first, and it made for a hell of a Naruto movie.

And speaking of, let's dive into those characters a bit now. Sarada proved to be one of the more compelling new characters in Kishimoto's manga mini-arc that he used to promote this movie, but here, it was Boruto's time to shine, and he definitely proves to be another pretty compelling character all his own as well. I sorta loved how he's so similar to Naruto in certain respects, yet in others is wildly different, so we aren't just getting a clone of our main character in the form of his son. He really does come quite a long way by the end of his journey, dealing with his father, with the current ninja system, and with the teachings of Sasuke, who takes him under his wing as his sensei, and you can really feel the growth and maturity that he experiences by the time the credits roll.

Naruto himself is also extremely interesting to see how far along he's come. He's far more stern and serious than we're used to seeing him, and yet I loved how, even so, there are moments where the old doof we all know and love is still in there somewhere. And Sasuke (or Uncle Sasuke, as Boruto humorously referred to him as) is probably the most likeable the character has ever been. For the first time, his friendship with Naruto feels genuine, and there's a certain humbleness added to his usual stoic manner that really shows just how far he, too, has come since his more troublesome teenage years.

And the animation was just something really special altogether. I've made a point in the past to highlight specific episodes of the anime that feel of a more cinematic quality in terms of their animation, and this movie is definitely on that level, giving us some of the most gorgeously fluid action the series has ever seen to date. It's so well that, even during the climactic battle, when we start to enter the more "monster mash" territory that I've complained about in the past, here, it just works, in an almost beautifully abstract way, like watching a painting come to life.

I would say if there was one negative aspect to the movie, it would be in the original characters introduced specifically for this film. There's a generic team of ninja scientists who have typical anime filler characteristics, both in terms of their appearance and their actions, which did sort of stick out, like they didn't quite belong in this world, as has always been the case when it comes to filler characters in the anime. And the main villain is a bit generic as well, just another Otsutsuki looking to complete Kaguya's plan, and we don't really learn a whole lot about him, so he's basically there just to be an obstacle for our heroes to overcome. But really, given how well everything else was executed, these minor discrepancies didn't stand out too badly, all things considered.

But yeah, getting to see this so soon after its Japanese release (and with the original Japanese voices still intact, no less) is pretty cool, and seeing it on the big screen was an especially awesome experience. The explosive sounds during the fights have so much more oomph that you just don't get watching it at home, and being surrounded by a bunch of enthusiastic fans really made it an experience that was definitely worth the effort to see.

This movie did so well in really capturing the heart and soul of the series, while still telling a complete and compelling story that feels right at home with the best the series has to offer, and doing so in a truly cinematic way that others can take note from. With thrilling, creative action, phenomenal animation, and a surprising amount of character depth and exploration, this wasn't just the best Naruto movie to date, Boruto is a legitimately fantastic movie even beyond that, and is well worth seeking out.