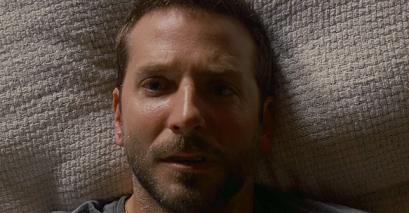 As I walked out of Silver Linings Playbook, I felt the movie was generally good for the most part, though it definitely had a few problems, most notably in the third act. However, this movie really doesn't sit well, as the more it settles in, the more its glaring issues really start to surface and take the whole thing over. Now I'll be getting into spoiler territory here, so heads up on that.

The plot basically follows Pat, played by Bradley Cooper, as he just returns home after being released from a mental health facility, where he was sentenced due to his uncontrollable anger issues. His main priority upon being released is to reconnect with his cheating wife, but everyone around him urges him to move on with his life. He's eventually introduced to Tiffany, played by Jennifer Lawrence, who's dealing with her own, similar issues, and who spends the rest of the movie manipulating Bradley Cooper like the obsessive bitch that she is.

I'm not even kidding when I say this girl's obsessed. During a scene in a diner, Bradley Cooper comments how she's clearly a different level of crazy from him, and you initially feel for the girl in the moment, but by the end of the film, you'll come to find that he was actually not too far off in his assessment. I swear to god she's gotta be spying on the guy or something throughout the whole movie. Somehow she just happens to conveniently know every single thing that he's up to before he even has a chance to tell her, and he even asks her how she always knows when he's out running after the second or third time she jumps from out of nowhere to tag along on his runs. And there's nothing necessarily bad about a character like this in a movie such as this. But where it gets bad is in the way the film decides to suddenly flip the script near the end.

Like I said before, the movie is honestly generally good for the most part, but then everything sorta starts to completely crumble apart in the third act. Suddenly, this serious, sometimes even charming dramedy decides to take a play out of a more trashy comedy's book, taking a forced rout into this whole betting scheme that feels entirely misplaced. And not only does the movie abandon the plot in this tonal shift of gears, but it leaves its established characters behind as well.

As I was saying before, Jennifer Lawrence's character is a lying, manipulative bitch. But while that's not necessarily a bad thing in and of itself, Bradley Cooper's reaction when he finds out that she's been lying to him and manipulating him this entire time is. Basically, he's perfectly, completely fine with it, which goes entirely against his character as we've grown to know him throughout the course of the movie. When he figured it out, I swore his reaction was going to be to storm back into the house and tear her a new one, but he didn't. Instead, he decides to end his crusade to get back together with his wife in favor of getting together with Jennifer Lawrence instead. Um... what?! Did whoever wrote this last third of the movie not even bother reading the script that preceded it?!

The only excuse that I can possibly come up with for that final act is a scene earlier on when Bradley Cooper is ranting about an Ernest Hemingway novel. He complains how the book takes a turn for the worse in the end and concludes on a down note. So I wonder if they didn't force this "happy ending" on us as a result of that rant, to provide the storybook ending that Cooper's character was after. Yet, the thing is, the movie still ironically ends on a sour note anyways once everything that transpired truly starts to sink in.

But, again, the movie honestly isn't all bad. Up until the final act, the movie is completely intriguing, and the character interactions are pretty fascinating to watch. And, being a comedic drama, there's actually quite a few good laughs in here. Cooper's rants and unfiltered dialogue certainly have their moments, and I especially got a kick out of the recurring appearances from Chris Tucker. And even with my major issues with the last act, I actually quite enjoyed the dance scene near the end of the movie as well.

That said, good as the movie is at times, I can't say that I can see where all of the awards recognition is coming from. Of all the Best Picture nominees at the Oscars this year (save for Amour, which I haven't seen), while I might not like them all, I can at least see where their nominations are coming from. However, I really don't understand the nomination for this one at all. I mean, sure, it's good, but aside from Bradley Cooper's performance (and he's definitely awesome here), there's nothing at all extraordinary about this movie. And even then, I don't really get all of the actor nominations either. The supporting cast played their roles well, but I'd hardly consider them amongst the year's best.

And Jennifer Lawrence I actually felt was flat out miscast. She looks (and is) far too young for the part she's playing. Her character had apparently been married to a man for over three years at some point before the start of the movie, yet she's only 22 years old and looks it. I mean, I know that teenagers getting married at a young age does happen sometimes, but it's a rare case to find, especially when there aren't kids involved. But even her age aside, I had a hard time buying her in the role anyways, as I felt she oftentimes over-acted the part.

But yeah, anyways, the movie's not all bad (at this point it probably sounds like I'm just trying to convince myself of that), and honestly, if it weren't for that severe off-road turn at the end, I'd probably be able to ignore all of this movie's other flaws. It's just such a shame, too, as I was just talking to a friend the other day about movies that overstay their welcome, and this is definitely one of them that should have probably found a way to wrap things up sooner, before it could have a chance to spiral out of control like it did.