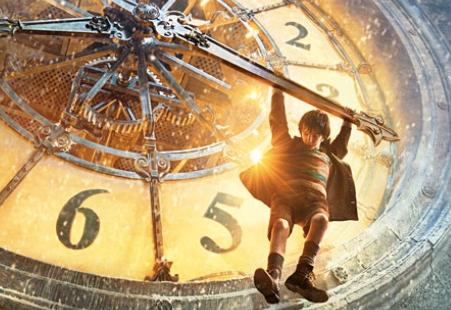 They aren't lying when they say that Hugo is a love letter to film. This is the latest from director Martin Scorsese, based on the book The Invention of Hugo Cabret. I was initially skeptical about this movie, as early previews didn't look too promising. However, seeing Martin Scorsese's name attached to this did pique my interest, as this definitely didn't look like his usual work, to say the least. But the more I learned about what this film was really supposed to be like, the more I had to see it for myself.

The trailers were a bit deceiving for this one, it's not nearly as silly as they'd leave you to believe. In fact, while the film is certainly kid friendly, I'd be hard pressed to actually call this a children's movie. I really see this being one where adults and lovers of film will get a whole lot more out of it than kids. It has the whimsy of a children's story, but deals with issues that are a little more adult, and I just can't help but feel that this won't be nearly as fun of a movie going experience for kids.

Not to call the film boring, it's really not. In fact, right from the very beginning, as the camera swoops in on the scene and follows our main character around, you can just tell that you're in for a real treat. Where Super 8 payed homage to more modern movies, Hugo pays homage to classic, silent films and film history. And like those silent films, this movie often plays out as a silent film itself, with scenes that are captured with a certain elegance that'll leave you mesmerized. To say the film is beautiful feels like the wrong word to use, given the dark, somewhat gloomy color scheme, though this film is very, very visually appealing.

The basic premise is that Hugo Cabret's father had died, leaving behind only a broken automaton that he found at a museum. Hugo is taken to a Paris train station, where he secretly works the clocks and lives the life of a thief, stealing the parts he needs to fix the automaton and discover his father's last message to him. In his journey, he meets Georges Méliès, the bitter old toy shop owner who catches Hugo stealing from his shop, and Isabelle, the young girl who helps him in his adventure.

The kids, played wonderfully by Asa Butterfield and Chloe Moretz, do a particularly good job in their roles, though there's times where they act more like adults than they do kids. These times are few, but they're a little jarring when they happen, and really feel misplaced. But that's really a minor nitpick, and all around, the acting is really good in this film. Even Sacha Baron Cohen, who was thankfully a lot more downplayed than the trailers lead on.

Where this film really begins to excel is when it dives into the history of film itself, and especially when we take a look into the true story of Georges Méliès' past as a magician and filmmaker. This part is just really interesting, and it's amazing to see how the imagery becomes more interwoven into the story. I just really love how truly connected everything feels the more our main characters learn.

Hugo is a nice, heart warming film that deals with following one's dreams, dealing with life's regrets, and ultimately finding one's place in the world. It's not what I was expecting, but I had a great time, and I really can't stress enough just how visually appealing this film is to watch. With so many big blockbusters and bigger name family films releasing now, it probably didn't come out at the greatest of times, but I'd still definitely try and give this one a look.
Posted by Chris Widdop at 12:19 PM